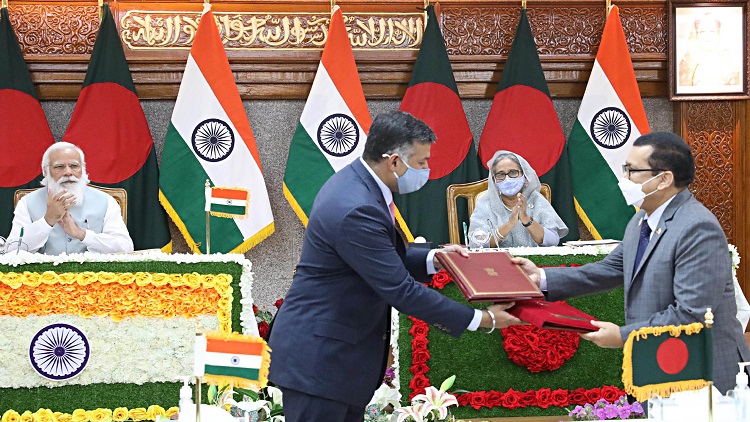 Bangladesh and India have signed five Memorandums of Understanding (MoUs).

In addition, several projects were inaugurated. India has gifted 109 ambulances and 12 lakh doses of Covid-19 vaccine to Bangladesh.

The MoUs were signed in a meeting held at Prime Minister’s Office (PMO) in Dhaka on Saturday afternoon.

Besides, Indian Prime Minister Narendra Modi handed over the keys of ambulances and Covid-19 vaccine to his Bangladesh counterpart Sheikh Hasina.

Later, an hour-long delegation level meeting of the two countries was held there.

After the delegation-level talks, Bangladesh and India signed five MoUs to boost cooperation.

In the meeting at PMO, Narendra Modi and Sheikh Hasina discussed the progress achieved in the areas of health, trade, connectivity, energy, development cooperation and many other issues.

They also inaugurated eight projects virtually.  The projects are – renovated Kuthibari in Shilaidaha, Independence Road from Mujibnagar to Kolkata via Nadia of West Bengal, memorial tombs of the Indian martyrs who sacrificed their lives during the Liberation War in 1971, 109 ambulances gifted by India, trans-border passenger train on the Chilahati-Haldibari route, and two border haats.

In a tweet after the meeting, India’s External affairs spokesperson Arindam Bagchi said India attaches the highest priority to Bangladesh under its Neighbourhood First Policy.

Relationship going from strength to strength!

Had a productive meeting with PM Sheikh Hasina. We reviewed the full range of India-Bangladesh relations and discussed ways to deepen economic and cultural linkages in the times to come. pic.twitter.com/pdRvJ7x3ho