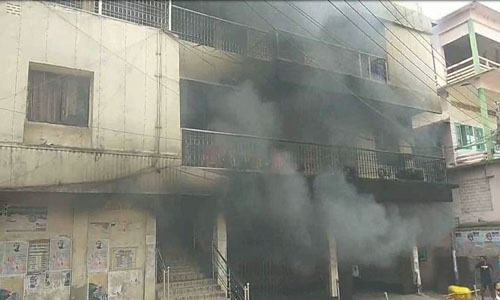 Brahmanbaria district turned into a battlefield on Sunday centering the daylong hartal called by Hefazat-e-Islam Bangladesh that left two dead.

Madrasa students put up barricade on different roads by felling trees and poles and torching wooden logs.
Demonstrators locked into clashes with law enforcers at Poirtala and police Lines area in the district town, Cumilla-Sylhet highway, Bishwa Road area and other places that left two dead.

One of the deceased was identified as Al Amin,19, son of Sufi Ali in Sarail upazila.

Locals said the two bullet-hit youths were rushed to Brahmanbaria Sadar Hospital in the afternoon. They died there later.

Meanwhile, another youth Nurul Amin, who received bullet wounds on Saturday, died at a hospital on Sunday.

With this, the death toll from the clashes took place from Friday to Sunday rose to nine.