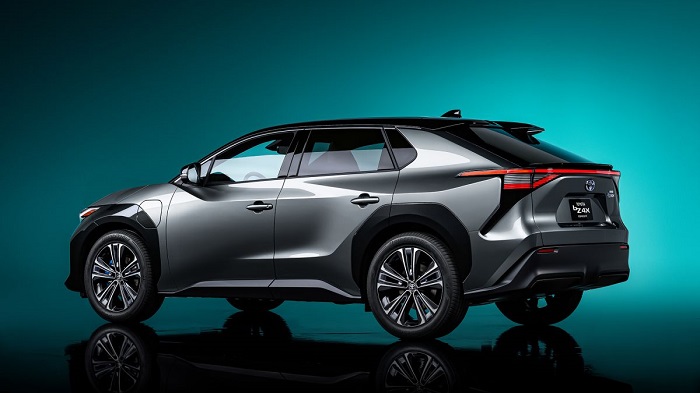 Toyota unveiled an electric SUV, the BZ4X, at the Shanghai Motor Show Monday. Currently, the BZ4X is a concept vehicle but Toyota intends to put it into production soon as a part of a major push into electric vehicles.

While it has been a pioneer in hybrid and even hydrogen fuel cell-powered vehicles, Toyota has been slower than some other major automakers, such as General Motors and Volkswagen, to enter the fully-electric vehicle market.
In the early 2000s, the Toyota Prius was received with the sort of excitement now seen for Tesla models. There were wait lists if you wanted to order one. Celebrities like Ryan Gosling, Leonardo DiCaprio, and Cameron Diaz were conspicuously photographed by paparazzi driving them.

Other automakers were criticized for not making more forward-thinking hybrid models like that. Almost 20 years after the second-generation Prius became a sensation, though, it’s Toyota that’s seen as being behind on creating fully-electric cars and SUVs while other rush to compete with Tesla.

The Toyota BZ4X is being jointly developed by Toyota and Subaru.

The BZ4X, which is being developed with Subaru, is one of 15 fully electric vehicles Toyota intends to offer globally by 2025, the company said.

The Japanese automaker said it plans to offer a total of 70 “electrified” models by 2025, including plug-in hybrids, regular hybrids and hydrogen-powered vehicles.
Toyota said it plans to become “carbon neutral” by 2050. That means the company’s products, as well as their production, will not add carbon dioxide to the Earth’s atmosphere. Other car companies, such as General Motors and Mercedes-Benz, have made similar pledges.

The Toyota BZ4X will be one of a new series of electric vehicles the company is planning.

Toyota will manufacture the BZ4X in China and sell it globally by mid-2022. The company offered no details about the vehicle, such as its expected price or driving range on a full charge. It would be Toyota’s first electric SUV since the Toyota Rav4 EV, which went out of production 2014.

The most recent version of that electric SUV, which was sold only in some parts of California and for just a couple of years, was a modified version of the Rav4 SUV equipped with batteries and electric motors provided by Tesla.

2021-04-21
Mr. Admin
Previous: The eight contenders for the best picture Oscar
Next: NASA to launch Rhodes College satellite into space