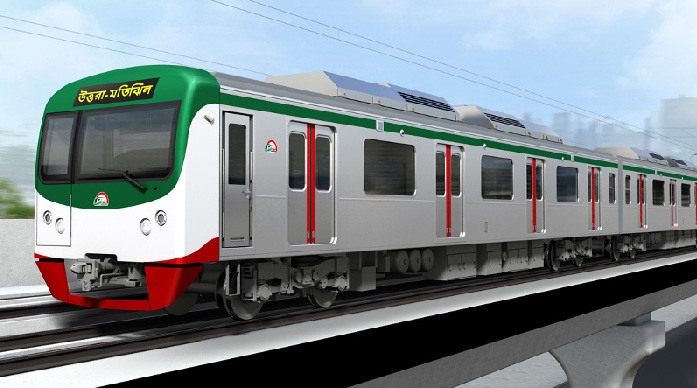 The first coach of metro train has been installed on the railway track of the metro rail depot at capital’s Diabari.

The coach was installed in a systemetic way around 12:05pm on Thursday.

Earlier, the coach was taken to Diabari depot in the morning.

The first set of six coaches of metro rail arrived in Dhaka on Wednesday.

A barge carrying two, out of six coaches, arrived at the newly-built jetty of Dhaka Mass Transit Company Limited (DMTCL) in the river Turag at Uttara in the capital on Wednesday afternoon.

A total of 24 sets of trains have been bought for the under-construction Uttara-Motijheel Metro Rail. The trains are being built by the Japanese company Kawasaki-Mitsubishi. Each set will have four coaches and two locomotives on each side, a project official said.

The Metro Rail authorities said that the rest 23 sets of trains will arrive in Bangladesh in phases. The second set of coaches will arrive in Dhaka on June 16, while the third set on August 13 sailing from Kobe on June 13.