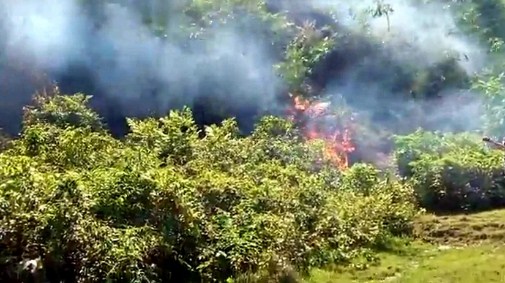 A massive fire that broke out at Lawachhara reserve forest on Saturday afternoon has been brought under control .

It was brought under control by a unit of Fire Service at 2:30 pm after over two hours of hectic efforts.

According to locals, some workers who were working in the student dormitory area of Lawachhara saw a fire in the forest at around 12:15 pm

Upon receiving the news, a unit of Kamalganj Fire Service came to the spot, but faced a huge challenge to enter into the forest as there were no roads.

Lack of water in the area made the work much difficult for the fire service unit.

However, the fire was doused after more than two hours.

Rezaul Karim, a divisional forest official, said the source of the fire could not be known immediately.

Farukul Islam, in- charge of Kamalganj fire service said that some small trees and plants were burnt into ashes. The extent of loss could go up to Tk 1 lakh, he said.

Shahidul Islam, a range officer in Lawachhara , said they are investigation the cause of the fire incident.