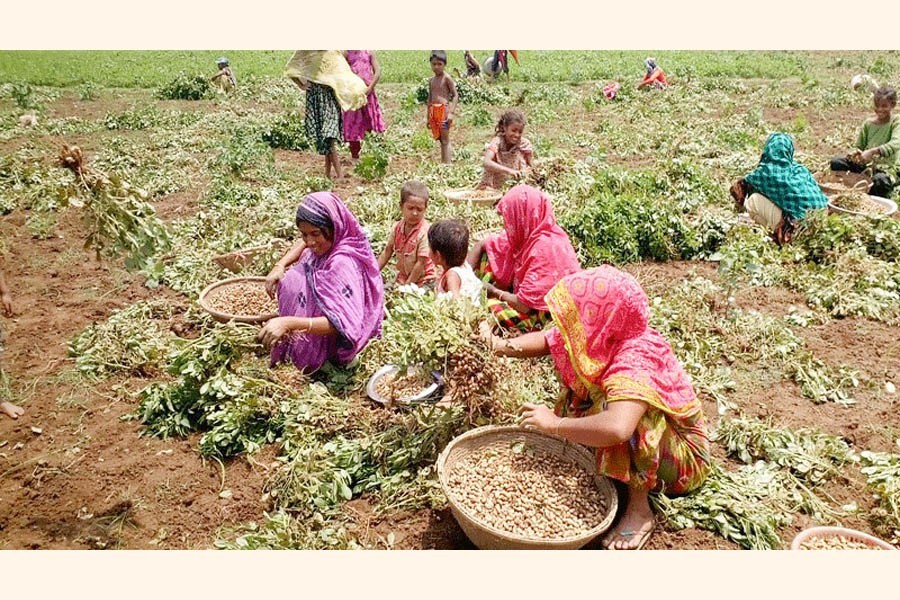 Photo : Women harvesting groundnut at a crop field in Tahirpur upazila of Sunamganj

Farming of high value but non-traditional crops like groundnut has been on rise in the greater Sylhet region as many farmers got interested in those for better returns, officials and farmers said.

According to a report prepared by the DAE Sylhet divisional office on Thursday, 1669 hectares of land were brought under cultivation of groundnut in four districts in the region during the current season. It includes 125 hectares in Sylhet, 49 hectares in Moulvibazar, 85 hectares in Habiganj, and the highest 1410 hectares in the district of Sunamganj.

On average, the production stood at 1.5 to 1.6 metric tonnes per hectare this season, an official informed as the harvest of the crop began in some areas.

A DAE official said groundnut farming has been spreading especially in Sunamgaj district in a big way. The crop is cultivated twice a year, he said adding once it was for winter only. Now the farmers can cultivate groundnut also in the kharif-1 season, which starts from March 15.

Suleman Mia of Tahirpur upazila cultivated groundnut on six bighas of land this season. At least 55 to 60 maunds of groundnut have been produced on the total land, he said. On an average Taka 4,000 to Taka 5,000 per maund has been earned, he added saying I am satisfied as there is a good demand in the open market. Many women are also involved with its farming and harvest.

Sunamganj DAE Deputy Director Faridul Hasan said the farmers here have great interest in groundnut due to a better return. Besides, the farmers here can produce the groundnut twice as the soil of the upazilas like Tahirpur, Sunamganj Sadar, Jamalganj, Doarabazar, Biswambharpur, and Tahirpur upazilas are suitable for the crop, said the official. The Sunamganj district’s total cultivated land stood at 1669 hectares this year.