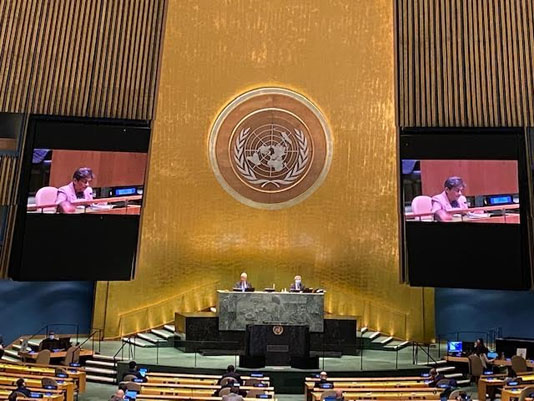 The United Nations General Assembly on Wednesday adopted unanimously a historic resolution, introduced by Bangladesh, on drowning prevention and proclaimed 25 July as World Drowning Prevention Day.
The Permanent Representative of Bangladesh to the UN, Ambassador Rabab Fatima introduced the first ever one-off UNGA resolution on “Global Drowning Prevention” which acknowledges the ‘silent epidemic’ for the first time in UN’s 75-year history, reports BSS.
Co-led by Ireland, the resolution was co-sponsored by a total 81member states, according to a press release received here today.
The resolution recognizes that drowning affects every nation of the world and provides a framework for action for an effective response to the unacceptably high number of drowning deaths.
The resolution further identifies that drowning is a preventable cause of mortality that disproportionately affects children and adolescents within and among nations.
A new UN Day for drowning prevention, 25 July, was also proclaimed to promote awareness and encourage national action, as well as share best practices and key solutions to drowning.
Bangladesh Permanent Mission to the UN in New York has been working since 2018 to ensure that this global and preventable epidemic secures much-deserved political space internationally.
In introducing the resolution at the plenary of the General Assembly, Ambassador Fatima stated that Bangladesh recognizes the urgency to have a resolution to generate greater political commitment to prevention of drowning and is honoured to lead this effort at the UN.
“We have reduced child mortality rates globally, however, if we cannot bring death from drowning to ‘zero’, our success in primary healthcare, and therefore, achievement of SDG 3 will remain unaccomplished,” she said.
Fatima mentioned that the government of Prime Minister Sheikh Hasina is working to ensure that no more precious lives are lost to water.
According to the WHO’s latest estimates, drowning is the cause of 235,000 deaths every year. Many countries report drowning as a leading cause of childhood mortality, particularly in children under-5.
Introducing the resolution on this unrecognized global issue fulfils yet another commitment of Bangladesh to promote social causes at the UN.
2021-04-29
Mr. Admin
Previous: Small businesses pin hopes on budget to stay afloat
Next: Enter the age of the vaccine selfie