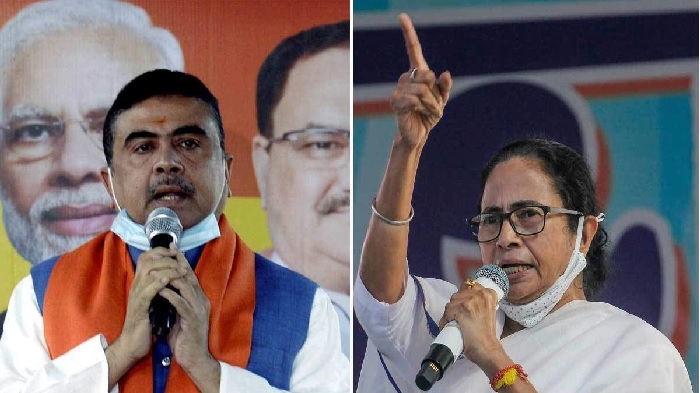 BJP candidate Suvendu Adhikari has finally been declared as winner in Nandigram constituency in the West Bengal Assembly election.

The Returning Officer declared him winner, saying ‘no recounting of votes will happen here.’

Conceding defeat, Mamata Banerjee said, “I accept the verdict of the people.”

“Do not worry about Nandigram, I struggled for Nandigram because I fought a movement. It is ok. Let the Nandigram people give whatever verdict they want, I accept that. I do not mind. We won more than 221 seats and BJP has lost the election,” Mamata said.

“But I will move the court because I have information that after the declaration of results there were some manipulations done and I will reveal those. BJP has lost the elections. They played dirty politics. We faced the horror of the Election Commission,” she added.

Mamata Banerjee said, “I will go to the court because I have heard there were some malpractices”.

Nandigram is the town that catapulted Mamata Banerjee to power for the first time in 2011.

Extreme confusion has been created over the polls results in the seat since Sunday (May 2) evening due to the server problems.

The Election Commission could not be able to provide accurate information. Finally, the Returning Officer announced the results that Suvendu secured 1,09,673 votes, while Mamata Banarjee bagged 1,07,937 votes.

The Returning Officer also announced that no recounting of votes will happen in the constituency, clearing way of victory for Suvendu.

Earlier, an extreme confusion created over polls results in Nandigram. After 17 rounds of vote counting, Trinamool Congress (TMC) Chief and West Bengal Chief Minister Mamata Banerjee was reported to have won. But in the evening, questions began to arise about Mamata’s victory. It is being said nothing is known properly due to problem in the server. After that news came over the victory of Suvendu Adhikari by 1,622 votes.

However, without the postal ballot, the margin of Shuvendu’s victory against Mamata is 9,787 votes.
Then, Mamata acknowledged in a press conference that she got defeated Nandigram election.

She said, “I accept the verdict in Nandigram. It is not a big deal. Don’t worry.”

But soon after, the Trinamool tweeted: “The counting process for Nandigram has not been completed. Please do not speculate.”

However, Mamata expressed her gratitude to the people of Bengal for her party’s victory despite her defeat.

2021-05-02
Mr. Admin
Previous: Vaccines to be procured at any expense, says PM Hasina
Next: Election in Sylhet- 3 not being held within 90 days