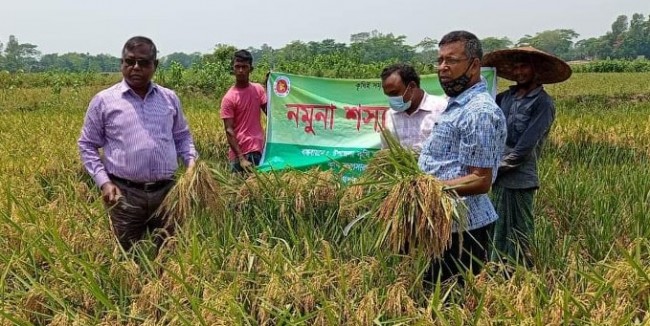 Department of Agriculture Extension (DAE) is expecting a bumper production of Boro in the Sylhet haor area this year and hopes that farmers will collect 30,000 tonnes of paddy more than this year’s target.

Farmers have already harvested 97 percent of Boro in the haor area due to favourable weather, and after full harvest, it will cross the target, the department said.

There is a very slim chance that flood can hamper production, but hailstorm is still a threat, said Deputy Director of DAE, Moulvibazar, Kazi Lutful Bari.

If the weather is favourable, farmers will be able to harvest all paddy within a few days, he said.

Abdul Halim of Hakaluki haor, who cultivated Bri-28 on his two acres of land and got a good harvest, said there is no labour shortage this season. As labourers cannot work in town during the pandemic, they are available here, he said.

Each of them is getting Tk 500 as a daily wage, he added.

Deputy Director of DAE, Sylhet Division Dilip Kumar Adhikari told that Boro has been cultivated on 4,83,705 hectares in four districts under the division this year, which is 9,510 hectares more than the previous year.

This year’s target for boro production in the four districts is 1.93 million tonnes of paddy.

“But since the paddy has been cultivated on 9,510 more hectares, we are expecting 30,000 tonnes more,” the official said.

Farmers have already harvested 97 percent Boro in the haor area and 57 percent in other areas till today, the DAE official said.

They are using machines alongside labourers for harvesting paddy, he said.