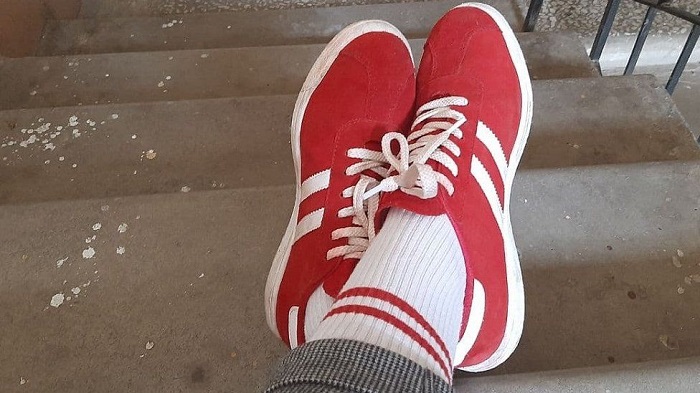 The Belarus authorities are now punishing not only those who fly the opposition red-and-white flag but even people sporting socks in those colours.

A woman on her way to a driving lesson was grabbed by four men in black balaclavas in the capital Minsk. They told her she was dressed improperly.
The reason? She was wearing white socks with red stripes, like the banned flag.

She was also accused of flashing V for Victory signs to passing drivers – who saluted back – and was heavily fined.

The white flag with a red stripe across it was the flag of Belarusian nationalists for brief periods in the 20th Century.

She was prosecuted under laws banning unauthorised protests. Her offending socks and red trainers were easy to see as she was wearing short jeans at the time.
The internet shop where she bought the socks has now stopped selling them – it does however sell similar white socks with black stripes.

Ms Sivtsova-Sedushkina was fined a similar amount previously for adorning her balcony with red and white ribbons.

Tens of thousands of protesters thronged Minsk for months last year, furious at President Lukashenko for claiming re-election in an August vote widely condemned as rigged.

Police used tear gas and baton charges to break up the demonstrations and arrested thousands. Many cases of police brutality were documented, and Mr Lukashenko remains internationally isolated except for Russian support.

The anti-government protests have largely died down, with the main opposition leaders either in exile or in prison.

More than 2,700 people have been prosecuted this year for anti-Lukashenko activities, as the crackdown continues.