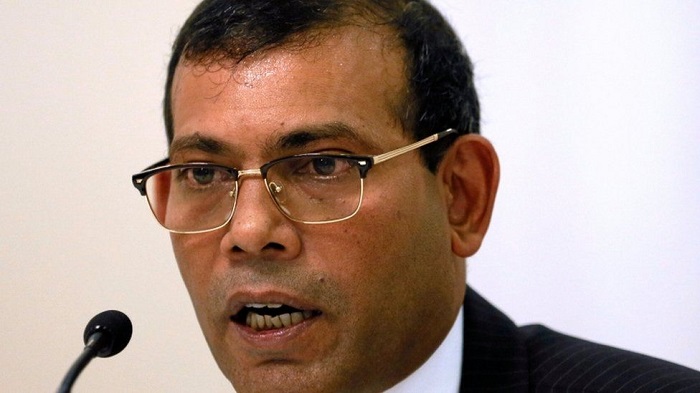 A British national was among four others injured in the blast, which is being treated as a terrorist incident. No-one has claimed the attack.

Australian police are travelling to the Maldives to help investigate.

Mr Nasheed was elected in 2008 but ousted in a coup four years later. He is now speaker of parliament – the nation’s second-most powerful position.

The Indian Ocean nation is known for its luxury holiday resorts, but has also faced political unrest and Islamist militant violence.

Mr Nasheed, 53, has been an outspoken critic of hardline Islamists.

President Ibrahim Solih described the explosion outside Mr Nasheed’s home on Thursday night as “an attack on Maldives’ democracy and economy”.

What do we know about the attack?

The explosion happened at 20:39 local time (15:39 GMT) in the capital Male, just before a night-time curfew was due to go into effect as part of measures to contain coronavirus.

While no-one has claimed carrying out the attack, police said all evidence indicated that it was a “deliberate act of terror”.

Two experts from the Australian Federal Police (AFP) will arrive in the Maldives on Saturday. It is the second time Australian authorities have helped the Maldives with an alleged assassination attempt. In 2015, the AFP and FBI joined an investigation into an explosion on then-President Abdulla Yameen’s speedboat.

Police investigate the scene of the blast

Two UK experts from the United Nations Office on Drugs and Crime (UNODC) are also assisting.

The hospital treating the former president said he was in a critical condition in intensive care on Friday after surgery to his head, chest, abdomen and limbs.

Among the four other people injured were two of Mr Nasheed’s bodyguards and two bystanders. Details of their conditions are not known.

Officials said one of the bystanders was a British national, but no name has been given.

President Solih has promised a “swift and thorough” investigation, saying the perpetrators will “face the full force of the law”.

Supporters of Mr Nasheed have gathered outside the hospital where he is being treated.