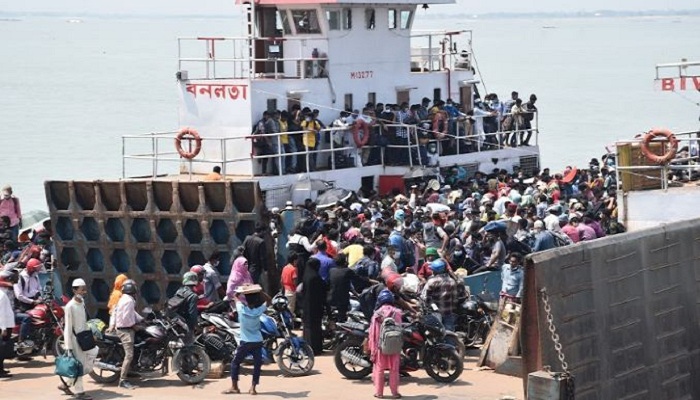 Eid home goers were flocking at the Paturia ferry ghat in Manikganj district since on Monday morning despite suspension of ferry services.
The pressure of passengers at the ghat is mounting today as time passes .
Ferry services are scheduled only to carry ambulances and vehicles with corpses, and vehicles carrying emergency goods, said Zillur Rahman, deputy general manager at BIWTC’s Aricha office.
But whenever a ferry anchored at the ghat, passengers were seen boarding on the ferries. The home bound people thronged at the yard and were trying hard to get them a little place on the ferry, reports our local correspondent.
Seven ferries crowded with passengers and emergency vehicles left the ghat till 11:00am. Cars and others private vehicles were also seen boarded on ferries.
Meanwhile, Shibalaya Police Station officer in-charge (OC) Firoz Kabir said apart from police, additional BGB personnel were also deployed at the ghat.
But, they could not stopped the huge crowd of passengers despite their hectic attempt, the OC added.
2021-05-10
Mr. Admin
Previous: Couple killed in Sunamganj over trifling matter
Next: Lady Gaga wraps up shoot for House of Gucci