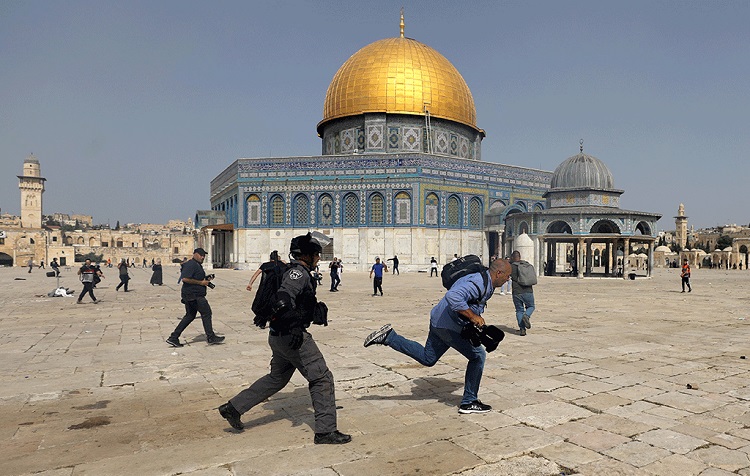 Hundreds were wounded in new clashes on Monday between Palestinians and Israeli security forces in Jerusalem as a planned march marking Israel’s 1967 takeover of the holy city threatened to further inflame tensions.
Palestinians hurled projectiles at Israeli officers in riot gear who fired rubber bullets, stun grenades and tear gas, an AFP correspondent at the scene said, following a night of sporadic clashes.
“There are hundreds of people injured from the clashes” and about 50 were hospitalized, the Palestinian Red Crescent said about the latest unrest since violence escalated following the last Friday prayers of the holy Muslim month of Ramadan.
The clashes were the latest in days of the worst such disturbances in Jerusalem since 2017, fuelled by a years-long bid by Jewish settlers to take over nearby Palestinian homes in Israeli-annexed east Jerusalem.
A key court hearing scheduled for Monday on Sheikh Jarrah, the flashpoint east Jerusalem neighbourhood at the centre of the property dispute, has been postponed.
There were fears of further violence in the city ahead of a planned march on Monday by Israelis to commemorate Israel’s takeover of Jerusalem in the 1967 Six-Day War, an anniversary known as “Jerusalem Day” in the Jewish state.
Israeli police had, as of Sunday, approved the march, which was scheduled to start around 1300 GMT.
The leader of the far-right Religious Zionism party, Bezalel Smotrich, has also announced a visit on Monday to the tense Sheikh Jarrah district.
Prime Minister Benjamin Netanyahu on Sunday defended Israel’s response to the protests and rioting.
“We will uphold law and order –- vigorously and responsibly,” Netanyahu said while vowing to “guard freedom of worship for all faiths.”
‘Escalatory practices’
But the Israeli role in the hostilities — especially on Friday’s clashes at the Al-Aqsa mosque compound, Islam’s third holiest site — has met widespread criticism.
All six Arab nations that have diplomatic ties with Israel — Egypt, Jordan, the United Arab Emirates, Bahrain, Morocco and Sudan — have condemned the Jewish state.
In Jordan, the custodian of Jerusalem’s holy Islamic and Christian sites, King Abdullah II condemned “Israeli violations and escalatory practices at the blessed Al-Aqsa mosque.”
Jordan and Egypt both summoned Israeli envoys on Sunday to lodge protests.
Tunisia said the UN Security Council was to hold a closed-door meeting on Monday, at its request, on the violence.
The Middle East quartet of envoys from the European Union, Russia, the United States and the United Nations — and Pope Francis — have all called for calm.
“Israeli authorities must exercise maximum restraint and respect the right to freedom of peaceful assembly,” UN Secretary-General Antonio Guterres said.
The Red Crescent said a total of more than 300 Palestinians were wounded on Friday and Saturday nights.
The UN children’s agency Unicef said that over two days, 29 Palestinian children had been injured in east Jerusalem, including a one-year-old.
Court case delayed
The unrest of past weeks in east Jerusalem, which Palestinians claim as their future capital, has multiple causes.
Much of the recent violence stems from a long-running legal effort by Jewish settler groups to evict several Palestinians from their homes in Sheikh Jarrah.
A lower court ruling earlier this year backing the settlers’ decades-old claim to the plots infuriated Palestinians.
A Supreme Court hearing on a Palestinian appeal had been set for Monday, but the justice ministry said on Sunday that in light of “all the circumstances” it would delay the hearing.
Old City shopkeeper Mohammad said Israeli police told him he must close on Monday afternoon, when Israeli Jews plan to march with Israeli flags to mark Jerusalem’s “reunification.”
Israel annexed east Jerusalem following the 1967 takeover, a move not recognized by most of the international community.
The unrest has spread across the Palestinian territories, including demonstrations and clashes in the occupied West Bank.
Palestinian president Mahmud Abbas has expressed “full support for our heroes in Al-Aqsa.”
Hamas Islamists who control the Gaza Strip have also voiced support for the Palestinian protesters and warned Israel of retribution if evictions proceed in Sheikh Jarrah.
Hamas chief Ismail Haniyeh called on Sunday for a united Arab and Muslim response against Israel’s “provocative desecration of the sanctity of Al-Aqsa Mosque.”
Four rockets were fired from Gaza towards Israel on Sunday, the army said, as well as incendiary balloons that started 39 fires on Israeli territory, according to the fire services.
The Israeli military said on Sunday that “tanks just struck Hamas terror targets in Gaza,” without giving further details.
2021-05-10
Mr. Admin
Previous: Cryptocurrency: Musk’s SpaceX to launch dogecoin moon mission
Next: 5 lakh doses of Chinese vaccine to arrive on May 12