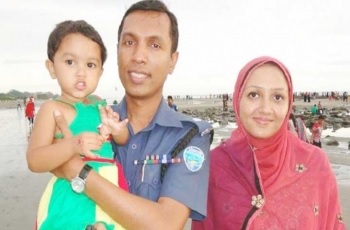 A new murder case has been filed against eight persons, including former police superintendent Babul Akhter, over the sensational murder of Mahmuda Khanam Mitu in Chattogram district.
Victim’s father Mosharraf Hossain filed the case with the Panchlaish Police Station on Wednesday afternoon.
According to PBI sources, the final report of the case filed by Babul Akhter after Mitu’s death was submitted to the court this morning.

Babul Akhter was then shown arrested in a new case filed by the victim’s father.

Meanwhile, the Police Bureau of Investigation says it has found evidence linking former superintendent of police Babul Akter to the murder of his wife Mahmuda Akter Mitu, according to a report of bdnews24.com.
“The PBI has found evidence that Babul Akter was involved in the murder of Mitu,” PBI chief Banaj Kumar Majumder said at a press conference at the PBI headquarters in Dhaka’s Dhanmondi on Wednesday.
“A murder case will be filed against him and he will be brought to court,” DIG Majumder added.
Mitu was hacked and shot dead near the GEC Intersection in Chattogram on the morning of Jun 5, 2016, while she was taking her son to school. It happened a few days after Babul had joined the police headquarters in Dhaka, following promotion and transfer.
It had initially been suspected that Babul’s actions against militants led to the murder of Mitu, but the investigation took a sharp turn after her family pointed the finger at Babul.
2021-05-12
Mr. Admin
Previous: Death toll from Colombia protests rises to 42, says human rights investigator
Next: China hands over 5 lakh doses Covid-19 vaccine as gift