To resolve all complications, SCC has finally decided to name the park as ‘Jananetri Sheikh Hasina Shishu Park’ 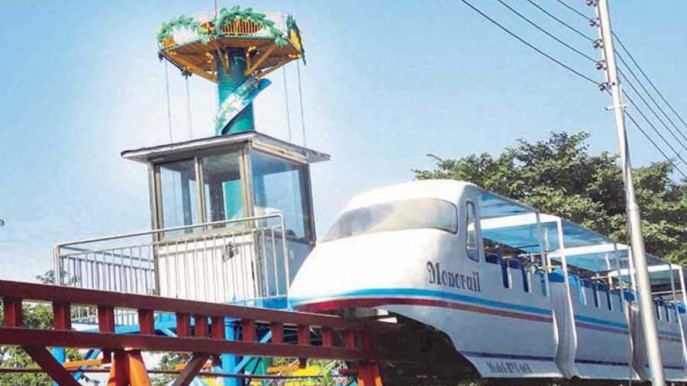 A children’s amusement park in Sylhet city is yet to be inaugurated even 15 years after the project was initiated only because of a difference of opinion over naming the park, which has long deprived children of healthy amusement.

In 2006, during the rule of the BNP-led four-part coalition government, the Sylhet City Corporation (SCC) initiated building the park at Dakshin Surma.

The park was at first named ‘M Saifur Rahman Shishu Park’ after the BNP leader, also the then lawmaker from Sylhet-1 constituency, who persuaded the city corporation to undertake the initiative. As the then finance and planning minister, he also facilitated fund allocation for it.

Before the construction was completed, the Awami League (AL) government came to power in 2008. Later, Saifur Rahman also died. At that time, Badruddin Ahmed Kamran, the then president of Sylhet Metropolitan AL unit, was the SCC mayor.

It has been alleged that after the AL government came to power, the city corporation did not take any initiative to complete the work as the park was named after BNP leader Saifur Rahman.

In 2013, Ariful Haque Chowdhury, a BNP leader and close associate of Saifur Rahman, undertook an initiative to inaugurate the park after he was elected the city mayor.

After completing construction work, he sent a proposal to the ministry to inaugurate the park named after Saifur Rahman. But, the local government ministry turned down the proposal.

Local AL leaders that time demanded that the park be named after Prime Minister Sheikh Hasina.

Mayor Ariful Haque Chowdhury then made several attempts to inaugurate the park, even changing its name to ‘Sylhet Natural Park’, or ‘Dakshin Surma Park’, but in vain.

Different rides, bought from abroad, are rusting away. Equipment of the electric sub-station installed in the park has been stolen.

The city corporation sources, however, said that the park has recently been renamed ‘Jananetri Sheikh Hasina Shishu Park’, and it will be officially inaugurated and opened to the public once the ongoing pandemic situation improves.

According to the sources, in 2006, different infrastructural constrictions of the park including filling of soil, construction of boundary wall, installation of electric substation and building of beautiful arches were completed.

However, after the change of government, the construction was stopped. After Ariful Haque Chowdhury was elected mayor, construction of the park resumed after several years. Work of setting up various rides, imported from China spending Tk15 crore, and other ancillary work was completed in 2017.  However, since then, complications arose over naming of the park.

SCC’s Chief Engineer Nur Azizur Rahman said, “The park could not be inaugurated in time due to various reasons. Now almost everything is ready. The name has also been finalised. The opening date will be announced at any time.”

In 2017, when the work of installing 15 rides in the park started, the SCC then announced that the park would be operational within six months. Four more years have passed since then, but SCC has not been able to inaugurate the park. As a result, many rides have been damaged.

Recently, a signboard ‘Jananetri Sheikh Hasina Shishu Park’ has been put up at the main gate of the park.

Ali Akbar Chowdhury, executive engineer of SCC, said all the work of the park has been completed. There is no complication regarding the name anymore. The park will be launched with the name ‘Jananetri Sheikh Hasina Shishu Park’.