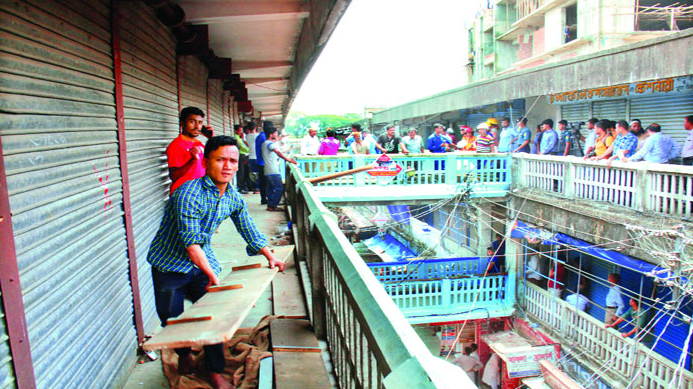 The Sylhet City Corporation (SCC) again retreated from its attempt to reconstruct the 40-year-old ‘City Super Market’, which was declared vulnerable years ago by the experts.

The SCC last week in a sudden move cancelled its bidding notice, floated in some local newspapers for dismantling the structure. The large market has been in a dilapidated state for many years.

The three-storey market with about 320 shops, built in 1980s by the then Sylhet Pourashava authority, has turned almost unusable with narrow stairs and poor roof. Several teams of civil engineers from various authorities like PWD and Shahjalal University of Science & Technology (SUST) visited the structure time and again before marking it vulnerable. The then Pourashava was made a city corporation in 2001.

During the last 10 years, the SCC authority repeatedly attempted to reconstruct the market, located just on the SCC building’s adjacent land. They even floated tenders to dismantle the structure and selected a contractor, who bought the remains years ago. But, the shopkeepers, who had taken lease of the shops from the then pourashava authority raised protests apprehending loss in the trade for years as the reconstruction would take a long period. However, the SCC assured them of allotting new shops, but failed to convince the mid- level traders.

The SCC, in its latest attempt, floated the bid on October 29 to dismantle the same, but had to again cancel it in the face of protests.

Admitting the market’s poor structure, the ‘City Super Market Baybosayee Samity’ President Joinl Hossain said, “We had protested the SCC’s move since there would be no major risk in years to continue using the market building”.

However, SCC Mayor Ariful Haque Chowdhury said, “The traders and shop owners had requested for time to arrange alternative place for trade and business. We would soon arrange some temporary place for running their business, he added. We are determined to reconstruct the old and vulnerable building, since the experts had given opinions for that. Besides, we must not forget the Sylhet region as an earthquake prone area”.