of Afghanistan last year. The WC debutatnts began promisingly but Bangladesh were

patient and waited for the inexperience to show. Mushfiqur and Shakib turned the game

around with their fifties, and then the bowlers sealed the deal.

of the match while Rubel picked up wicket in his very first bowl in this tournament.

After that, Nawroz Mangal and Samiullah Shenwari were trying to repair their inning and

both batsmen were discharging their responsibility calmly towards a long innings. That

was stopped by Mahmudullah. He sent Mangal out of the crease on 65. Before left the

in an eyecatching run out by wicket keeper mushfiq.

forward, but their partnership ended at 136 after adding 58-runs. Afghan skipper Nabi

was out as seventh wicket, on the next bowl by the Bangladesh skipper Mortaza, adding

picked up 2 wickets while Rubel Hossain, Mahmudullah and Taskin took one wicket

run partnership in their World Cup 2015.

After winning the toss, the Bangladesh team elected to bat first with the openers Tamim

Iqbal and Anamul Haque. But they failed to give a good start to the team. Tamim was out

in the batting powerplay overs. They struck fifties and revived the Bangladesh innings,

picking up the scoring rate with a flurry of boundaries. 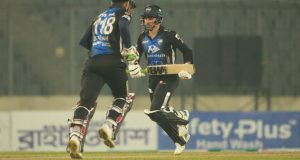 Messi hits winner as PSG come from behind to beat Toulouse