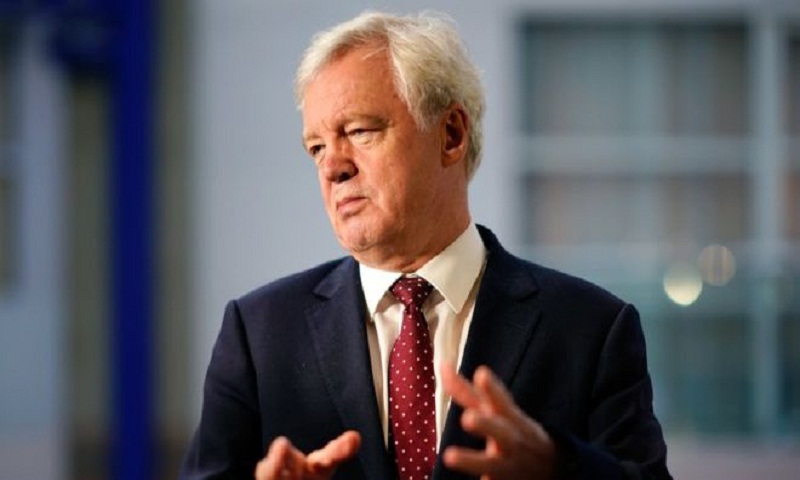 Cabinet ministers should “exert their collective authority” and rebel against Theresa May’s proposed Brexit deal, ex-Brexit Secretary David Davis has said.
The PM has suggested a temporary customs arrangement for the whole UK to remain in the customs union while the Irish border issue is resolved.

Brexiteers suspect this could turn into a permanent situation, restricting the freedom to strike trade deals.

Writing in the Sunday Times, Mr Davis said the plan was unacceptable.

“This is one of the most fundamental decisions that government has taken in modern times,” he added.

The article comes ahead of a crucial summit with EU leaders in Brussels on Wednesday which will determine whether or not a deal can be struck.

Mr Davis resigned from his post in July – days after Mrs May’s so-called Chequers deal was agreed by cabinet – saying he did not believe in the plan.

He was soon followed out of government by the then-Foreign Secretary Boris Johnson, who claimed the PM was leading the UK into a “semi-Brexit” with the “status of a colony”.

The pair have been vocal opponents of Mrs May’s direction since returning to the backbenches.

The issue of the border between Northern Ireland and the Republic of Ireland, which will become the UK’s border with the EU, is one of the last remaining obstacles to achieving a divorce deal with Brussels.

Wrangling is continuing over the nature of a “backstop” to keep the border open if a wider UK-EU trade arrangement cannot resolve it.

The EU’s version, which would see just Northern Ireland remain aligned with Brussels’ rules, has been called unacceptable by Mrs May and the DUP.

Mr Davis said the government’s negotiating strategy had “fundamental flaws”, arising from the “unwise decision in December to accept the EU’s language on dealing with the Northern Ireland border”.

Negotiations have continued this weekend between the UK and the EU ahead of Wednesday’s meeting.

Deal or no deal

On Saturday evening, German newspaper Suddeutsche Zeitung reported a deal had already been reached between Mrs May and the EU, and would be announced on Monday.

But a No 10 source told the BBC the report was “100%, categorically untrue” and negotiations were ongoing.

The paper said it had seen a leaked memo from EU negotiators to EU ambassadors stating: “Deal made.”

DUP leader Arlene Foster, meanwhile, warned the prime minister on Saturday not to accept a “dodgy” deal with the EU.

Mrs Foster said Mrs May should not back a plan that would “effectively cut Northern Ireland adrift”.

According to a leaked email reported in the Observer, Mrs Foster is preparing for a no-deal Brexit.

More than three-quarters of NHS trusts, however, have made no preparations for the UK’s departure from the EU whatsoever, according to Freedom of Information obtained by the People’s Vote campaign.

The group also commissioned a YouGov poll of the UK’s doctors and nurses, who – according to the poll – now back another referendum by a margin of three to one.