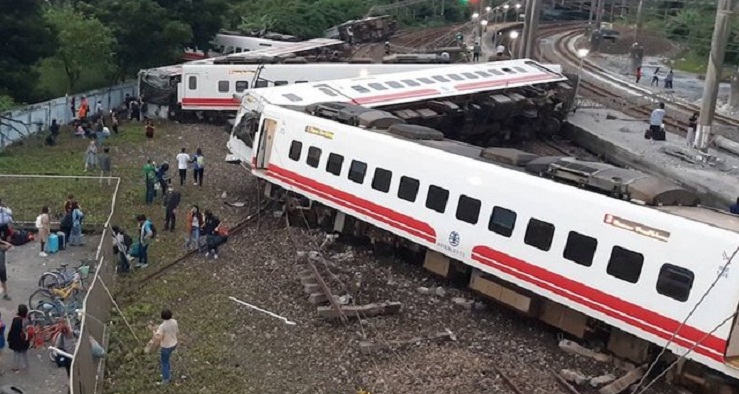 Taiwan’s president pushed for a swift investigation Monday after an express train derailed on a coastal tourist route, killing 18 people as it sent sleeping passengers flying from their seats.

The crash on the popular east coast line injured another 187 people Sunday and left the Puyuma Express lying zig-zagged across the tracks in the island’s worst rail accident for a quarter century.

Among those who died, the youngest was nine years old. Two students aged 12 and 13 from a junior high school in Taitung — where the train was headed — were also killed, according to the transport ministry.

“Everyone is concerned about the cause of the incident and I’ve asked prosecutors to clarify the situation… and the cause soon,” President Tsai Ing-wen told reporters as she visited the scene of the accident Monday.

A task force and forensic units will determine whether the derailment was “an accident or human error” prosecutor Chiang Jen-yu said as investigators combed through the wreckage for evidence.

Passengers who survived the accident recalled how the train had been shaking intensely during the journey and was going “very fast” before it derailed.

“The train stopped twice and we were told that there were problems that needed repair but the train restarted not long after,” one passenger who identified herself as Mrs Chiu told reporters.

“We felt that the speed was too fast, then there was a crashing sound and we flew off (from the seats),” she said, adding that many passengers were sleeping at the time.

An official from the Taiwan Railways Administration said the train driver had reported a pressure device used for braking had malfunctioned 30 minutes before the accident, but that it should not have caused the train to go too fast.

Officials said Monday that the search for victims had ended at the accident site in the northeastern county of Yilan and that no more passengers had been found in the carriages.

Local resident Huang Chang-han, 61, told AFP he had been at a nearby hillside temple with a group of people who had rushed to help.

“There was a big bang, and black smoke, the scene was horrible, beyond words,” he told AFP.

“We rushed to the scene to help carry the kids and elderly people. There was blood all over, everyone was busy helping people,” he said.

Cranes were brought in overnight to lift the Puyuma Express coaches away from the southbound track. All eight carriages derailed and five had flipped onto their side.

Crane operators told an AFP reporter at the scene that work had been hampered by wet ground due to recent rain, so stabilising platforms were being brought in for the cranes.

“At this difficult time let us all pray for the injured and hope the deceased can rest in peace,” said President Tsai.

She also thanked the international community, including the United States and the European Union for expressing condolences over the incident.

Video footage of the aftermath of the crash, broadcast on local Taiwan television, showed passengers smashing a window from inside and kicking it through to escape.

The crash was the worst rail accident in Taiwan since 1991, when 30 passengers were killed and 112 injured after two trains collided in Miaoli in western Taiwan.