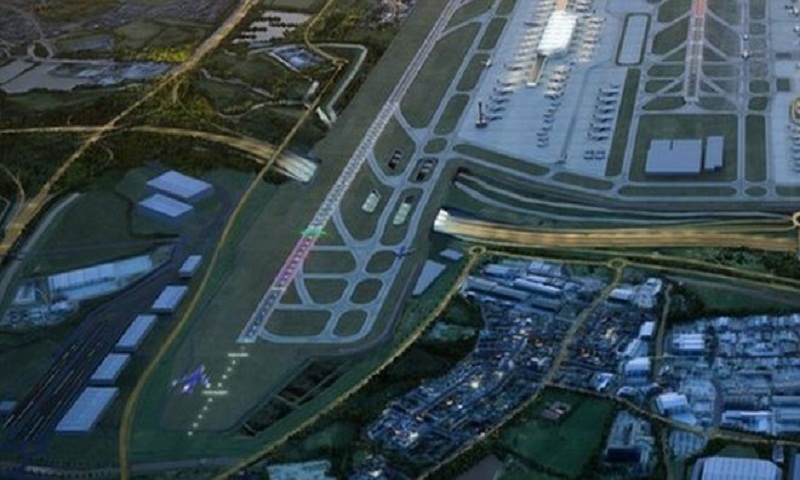 London, Jun 18 : Heathrow Airport will construct a third runway by 2026 and complete its expansion by 2050, according to its “masterplan” published on Tuesday.
The plan includes diverting rivers, moving roads and rerouting the M25 through a tunnel under the new runway.

Heathrow’s expansion has faced fierce opposition, but the airport says it has engaged with local communities and other stakeholders.The proposals are now open to public consultation until 13 September.

The masterplan is illustrated in a visualisation from the architects, showing the M25 running in a tunnel underneath the new runway.

It proposes a staggered approach with the new runway to be built in the first phase by 2026, with the rest of the airport infrastructure – including new terminals and access – to be complete by around 2050.

Local and environmental groups have argued that expanding Heathrow and building a third runway would mean unacceptable levels of noise and pollution, as well as adding to the UK’s carbon emissions from the increased number of flights.

In response to those criticisms, the plan also outlines a new low-emission zone for the airport, meaning additional charges for those who drive a more polluting vehicle to the airport.

Heathrow says it is pursuing better public transport links and is proposing a longer respite at night, providing local communities with six-and-a-half undisturbed hours without a flight.”We have been working with partners at the airport, in local communities and in government to ensure our plans show how we can grow sustainably and responsibly – with environmental considerations at the heart of expansion,” said Emma Gilthorpe, Heathrow’s executive director for expansion.

The plan also gives details of the proposed compensation scheme for people whose houses will have to be demolished to make way for the expansion.

In all, 761 homes are expected to go, including the entire village of Longford.

Heathrow says it will pay the full market value plus 25% for properties in its compulsory purchase zone, as well as for some houses in the surrounding areas. Homeowners can find out whether they are eligible by checking their address on the consultation website.

“Not only does it want to disrupt people’s lives for up to 30 years whilst building this new runway, but now proposes jumbo-size car parks whilst pledging to reduce the number of people using cars at the airport.”

Another group, Hacan, echoed those sentiments. “What hits you is the scale of these proposals,” said John Stewart, who chairs the group.

“The impact on local people could be severe for many years to come. Disruption from construction; the demolition of homes; the reality of more than 700 extra planes a day.”

The government agreed last year to back the scheme for expanding Heathrow.

This week, environmental protest group, Extinction Rebellion, called off plans to disrupt operations at Heathrow to coincide with the announcement of its expansion plans.

The public will be able to have their say on the plans via a website and at 43 “consultation events” during the 12-week period.

The first phase of the privately-funded expansion – to deliver the new runway – is expected to cost £14bn. The total cost is expected to be in the region of £30bn.

Ms Gilthorpe said she hoped to “have spades in the ground” by early 2022.