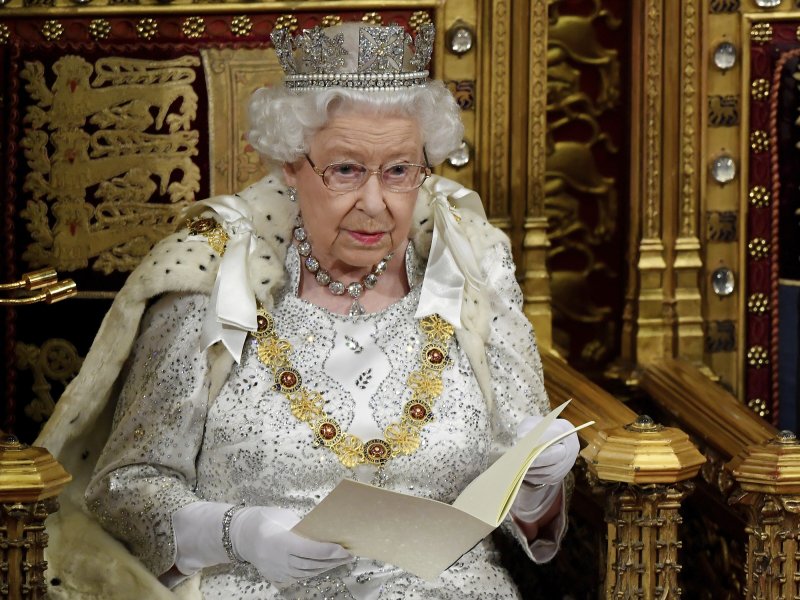 Belying the need for speed across the Channel, Britain trotted out a horse-drawn carriage and a diamond-encrusted crown so the queen could read out the government’s post-Brexit plans to Parliament.

In terms of historical importance, the painstaking paragraph-by-paragraph talks at the EU’s glass-and-steel Berlaymont headquarters seriously outweighed the regal ritual in which an ermine-draped monarch delivered a speech on the priorities of a Conservative Party government that could be out of office within weeks.

Britain is scheduled to leave the EU on Oct. 31, and an EU summit on Thursday or Friday was long considered one of the last possible chances to approve a divorce agreement to accommodate that timeframe.

British Prime Minister Boris Johnson insists the country will leave at the end of the month with or without a deal, something the queen reiterated Monday.

“My government’s priority has always been to secure the United Kingdom’s departure from the European Union on the 31st of October,” the 93-year-old queen said in a speech to Parliament that was written for her by the government.

It remains to be seen whether Johnson will achieve that goal.

Ireland, Finland and Spain all said the Brexit negotiations could well go beyond this week and go right down to the wire at the end of the month.

Irish Foreign Minister Simon Coveney said late Monday it was “too early to say if it is possible to get a breakthrough this week or whether it will move into next week.”

Antti Rinne, prime minister of Finland, which currently holds the EU presidency, said in Helsinki that he had given up hope for a quick breakthrough ahead of the Brexit summit.

“There is no time in a practical way, and in legal base, to reach an agreement before the meeting,” Rinne said. “We need to have more time.”

At the EU foreign ministers meeting in Luxembourg, Spanish Foreign Minister Josep Borrell told The Associated Press that the Brexit talks were following a well-traveled path.

Technical teams from Britain and the EU worked through the weekend and Monday, but both sides said significant gaps remained between their positions.

The discussions centered on future border arrangements between EU member Ireland and Northern Ireland, which is part of the U.K. Johnson has put forward a complex proposal to eliminate the need for customs checks, but EU officials say more work is needed.

An EU diplomat familiar with the talks said there probably needed to be a three-month extension for the Brexit deadline to turn the British proposals into a legally binding deal.

“There are big problems remaining to counter smuggling and fraud because the British outlines are still that vague,” said the diplomat, who spoke on condition of anonymity because the talks are still in progress.

In London, the queen delivered a speech outlining an ambitious — and critics say undeliverable — legislative program for Johnson’s government. The 10-minute speech, read by the monarch from a gilded throne in the House of Lords, included more than 20 bills, including a law to implement an EU withdrawal agreement, should one be reached.

It also contained plans for post-Brexit reforms to agriculture, fishing and immigration that will include the ending in 2021 the automatic right of EU citizens to live and work in Britain.

Government’s critics called the speech a stunt, because Johnson’s Conservative administration lacks a majority in Parliament and an early general election looks likely within the next few months, whether or not Britain leaves the EU as scheduled Oct. 31.

“The Queen’s Speech was an election broadcast for the Tory Party more than anything else,” tweeted Scottish National Party leader in Parliament Ian Blackford.

The speech was part of the State Opening of Parliament, a ceremony steeped in centuries-old symbolism of the power struggle between Parliament and the British monarchy.

The state opening is usually an annual event, but amid the country’s Brexit chaos there had been no queen’s speech for more than two years — the longest gap for more than three centuries.

Lawmakers will hold several days of debate on the speech, culminating in a vote, which the government could well lose. That would heap even more pressure on Johnson’s embattled administration.

The challenge of maintaining an invisible border on the island of Ireland — something that underpins both the local economy and the region’s peace deal — has dominated Brexit discussions for three years since U.K. voters chose in 2016 to leave the EU.

Britain’s Parliament is due to sit on Saturday this week, for the first time since the Falklands War of 1982, to decide on the next steps after the EU summit.

If a Brexit deal is reached, it still needs to be approved by both the British and European parliaments. Many British lawmakers — on both pro-Brexit and pro-EU sides of the debate — remain unconvinced.

Opposition Labour Party leader Jeremy Corbyn says his party is unlikely to support any Brexit deal agreed upon by Johnson.

Whether or not he secures a Brexit deal, Johnson is likely to face a move by lawmakers to hold a new referendum on whether to leave the EU or remain. If there is no Brexit deal, lawmakers will try to make sure Johnson’s government seeks to delay Brexit rather than crashing out without an agreement.