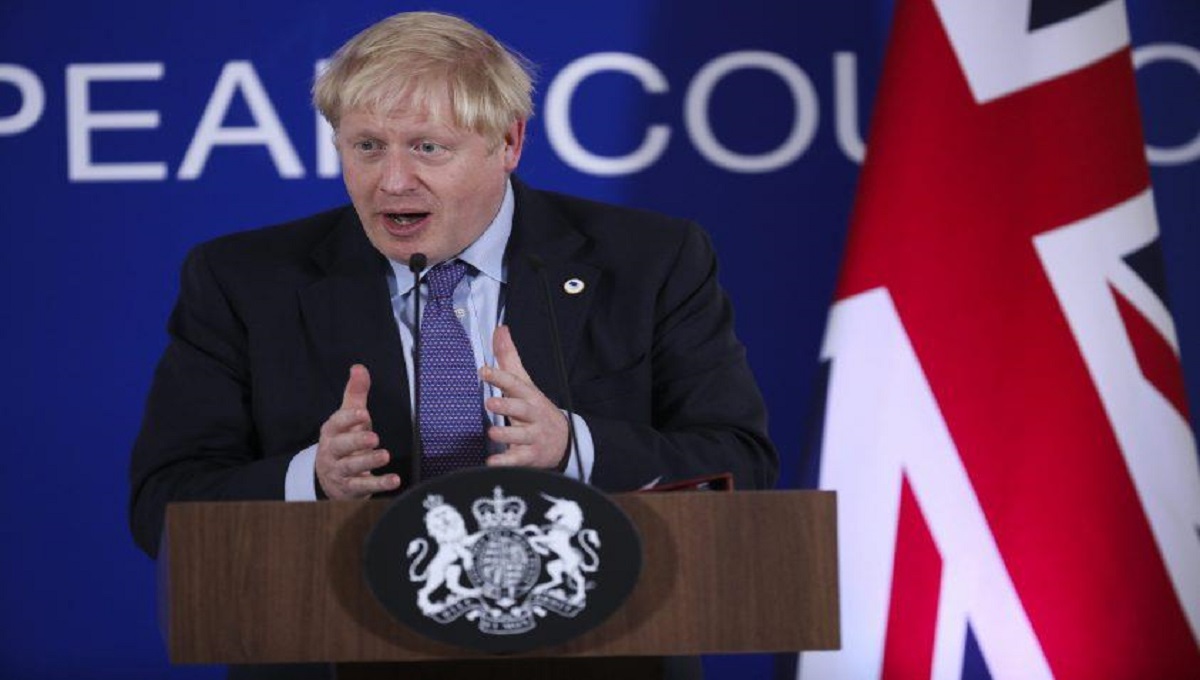 London, Oct 19 : Boris Johnson worked behind the scenes Friday to win enough support to push his new Brexit deal through the fractious British Parliament and pave the way for Britain — finally — to leave the European Union in two weeks.

His message to allies and opponents alike: Approve the agreement so Britain can finally put the tortuous, three-year Brexit saga behind it.

Johnson returned overnight from the EU summit in Brussels where he sealed the divorce deal and began a busy day of meetings and phone calls as he attempted to persuade lawmakers to ratify the pact at a rare Saturday sitting of Parliament. He met Friday with his Cabinet ahead of what’s expected to be a knife-edge House of Commons vote on what was being billed by an excited media as Super Saturday.

“I want colleagues on all sides of the House to think about a world tomorrow night in which we’ve got this thing done and we’ve got it over the line,” he told British broadcaster ITV. “Because I think the nation will heave a great sigh of relief because that will be our moment to get on with the priorities of our country.”

Johnson’s Conservative Party holds only 288 seats in the 650-seat House of Commons, so he will have to rely on support from other parties and independent lawmakers to get over the line.

The vote appeared to be tight, and it could yet be disrupted. While the vote will mark a defining moment, the Brexit saga may have more twists in store .

Many lawmakers want to rule out the possibility that Britain could crash out of the bloc without a deal on the Oct. 31 deadline — a prospect economists say would disrupt trade and plunge the economy into recession. A proposed amendment to Saturday’s vote would withhold approval of the deal until all the necessary legislation to implement it has passed.

One of the lawmakers behind the measure, Oliver Letwin, said it would prevent the U.K. from leaving at the end of the month “by mistake if something goes wrong during the passage of the implementing legislation.”

It’s not certain the amendment will be selected for a vote, or whether it will pass if it is.

Parliament has also passed a law compelling the government to ask the EU for a three-month delay to Brexit if a deal is not approved on Saturday.

European Union leaders, who unanimously approved the deal at a meeting in Brussels on Thursday, applied pressure to lawmakers by suggesting there is no guarantee they would grant another delay if the latest deal is rejected.

“I want us to finish this off and speak about the future,” French President Emmanuel Macron said Friday at an EU summit in Brussels. “The Oct. 31 date must be respected. I don’t believe new delays should be granted.”

Johnson’s hopes of getting the deal through Parliament were dealt a blow when his Northern Ireland ally, the Democratic Unionist Party, said it would not back him.

The DUP’s Brexit spokesman, Sammy Wilson, said Johnson’s Brexit package — which carves out special status for Northern Ireland to keep an open border with EU member Ireland — is bad for his region and its bonds with the rest of the U.K.

“I can give you absolute assurance we will not be voting for this deal when it comes before the Commons tomorrow,” he told the BBC.

While the DUP is resolutely opposed to the deal, opinion is divided in Northern Ireland.

In a sawmill in the town of Enniskillen, the home constituency of DUP leader Arlene Foster, CEO Brian Murphy voted to stay in the European Union in the 2016 Brexit referendum.

His company buys logs from sustainably managed forest with 60% of them coming from the Republic of Ireland. The uncertainty of Brexit for the past three years has caused grave concern that is now starting to lift.

“The overwhelming emotion was one of relief,” Murphy said of the new deal, which would prevent border formalities for his company’s trucks, which pass between Ireland and Northern Ireland 23,000 times a year.

“Imagine asking a lumberjack to fill out eight different forms by the side of our truck in the forest in the middle of the winter as horizontal rain hits you in the face,” he said.

The deal’s fate could largely rest on a group of 21 Conservative lawmakers expelled from the party’s group in Parliament earlier this year for voting against the government, and on members from the main opposition Labour Party, which has 244 lawmakers.

Nicholas Soames, one of the 21 and the grandson of former Prime Minister Winston Churchill, said he would vote for the deal, and he thought most of his expelled colleagues would “by and large vote for it.”

Labour leaders have told party lawmakers to oppose the deal. But around 20 of them, mainly representing pro-Brexit parts of the country, have previously indicated a desire to back a deal to honor the referendum result.

While a majority of Parliament supports leaving the EU, in keeping with voters’ decision, members are split on the terms. Labour lawmakers worry that the Johnson deal’s vision of a loose post-Brexit economic relationship with the EU could endanger workplace and environmental protections that Britain gained as a member of the bloc.

It’s a complex situation and not even expert analysts can gauge the exact numbers.

“There seems to be an indication that it will be very, very close. It will come down to one, two or five people,” said Joelle Grogan, a senior lecturer in U.K. and EU law at Middlesex University. With the vote only 24 hours away, “I have no idea what that will look like.”

If the deal is rejected — as happened three times with an earlier agreement presented by Johnson’s predecessor, Theresa May — Brexit uncertainty will continue a while longer. Johnson has said he won’t do that, but also that he will obey the law, an apparent contradiction.

Conservative lawmaker John Baron acknowledged the vote would be tight but said Johnson was on a roll.

“The momentum is with the prime minister, and momentum at a time like this is important,” he said.

2019-10-19
Mr. Admin
Previous: Are you Anaemic? Increase your iron levels by adding these foods
Next: German envoy for promoting academic exchange with Bangladesh