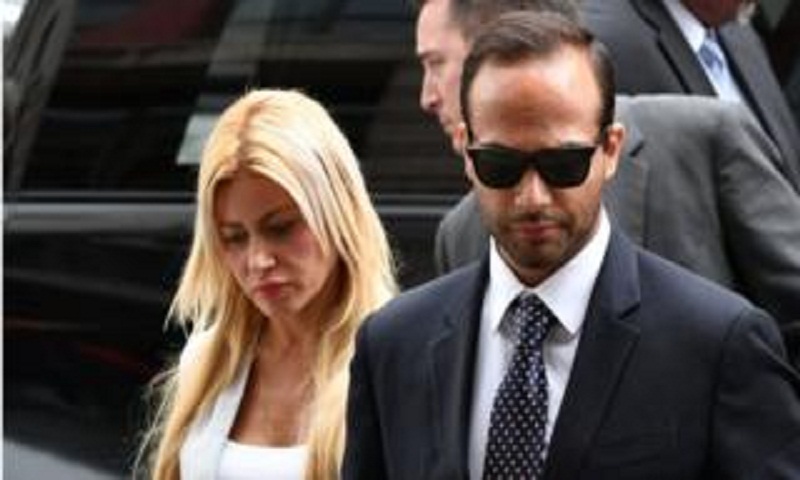 The former Trump adviser whose remarks in a London pub sparked the US inquiry into possible collusion with Russia has been sentenced to 14 days in jail.
George Papadopoulos, 31, told the court in Washington DC he was a “patriotic American” who made a mistake by lying.

He pleaded guilty last October to lying to the FBI about the timing of meetings with alleged go-betweens for Moscow.

He was the first former Trump aide arrested in the probe into an alleged Kremlin plot to sway the 2016 US vote.

US President Donald Trump reacted by taking an apparent swipe at the cost of the investigation into the former aide.

He said in court that his “entire life has been turned upside down” and he hoped “for a second chance to redeem myself”.

Papadopoulos concluded by saying “this investigation has global implications, and the truth matters”.

The Chicago native was a London-based petroleum analyst before he joined the Trump campaign in March 2016 as a volunteer foreign policy adviser.

The professor told Papadopoulos the Russians had “dirt” on Mr Trump’s Democratic presidential rival Hillary Clinton in the form of “thousands of emails”.

The young political operative told Mr Trump, then a Republican presidential candidate, and other members of the campaign’s national security team that he could set up a meeting with President Vladimir Putin ahead of the November 2016 election.

A pre-sentencing statement last week read: “While some in the room rebuffed George’s offer, Mr Trump nodded with approval and deferred to Mr Sessions, who appeared to like the idea and stated that the campaign should look into it.”

Papadopoulos told CNN in an interview aired on Friday that Mr Trump “gave me a sort of a nod” and “wasn’t committed either way” about the idea of a meeting with the Russian leader.

But he said then-senator and now-Attorney General Jeff Sessions “was actually enthusiastic”. Last November, Mr Sessions testified to Congress that he had “pushed back” against Papadopoulos’ offer.

American authorities were alerted in mid-2016 after Papadopoulos told an Australian diplomat during a drinking session in a London pub about his meetings with Professor Mifsud. The envoy alerted US investigators.

When the FBI interviewed him in January 2017, Papadopoulos falsely claimed he had met two individuals with Russian ties before he joined the president’s team in March 2016.

He had actually met them after joining Mr Trump’s campaign.

One individual was a Russian woman who Papadopoulos believed had connections to the Russian government.

Outside court on Friday, Papadopoulos’ lawyer, Thomas Breen, said his client was a “fool” and had acted “stupidly” in lying to the FBI.

But the attorney said “the president of the United States hindered this investigation more than Papadopoulos ever could”.

He said Mr Trump had hampered the inquiry by calling it a “witch hunt” and “fake news”.