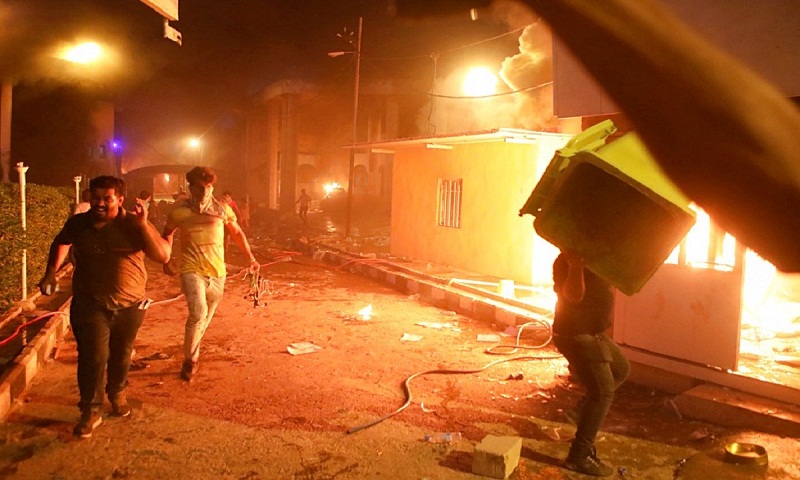 Angry protesters stormed the Iranian consulate in the southern city of Basra Friday, setting a fire inside as part of ongoing demonstrations that have turned deadly in the past few days, a security official and eyewitnesses said.
At least 10 protesters have died in clashes with security forces since Monday, including three who were shot dead by security forces on Thursday night as protesters lobbed Molotov cocktails and set fire to a government building and offices of Shiite militias in the city.

Residents of Basra and other cities in Iraq’s oil-rich southern Shiite heartland have been protesting since July over endemic corruption, soaring joblessness and poor public services. Clashes erupted earlier this week, leaving several civilians and police dead. Prime Minister Haider al-Abadi has ordered an investigation into the violence which shows no sign of abating.

The violence prompted the temporary head of Iraq’s parliament, the eldest lawmaker, to call an emergency meeting on Saturday to discuss the snowballing protests.

The protesters shouted anti-Iranian slogans outside the Iranian consulate Friday evening, including “Iran, out, out!” before they stormed it and set a fire inside. Smoke could be seen rising from the building. Protesters also burned an Iranian flag. Many residents of the predominantly Shiite city accuse Iranian-backed political parties of interfering with Iraqi politics and some hold them responsible for mismanagement and the poor services in the city.

Later Friday, angry protesters marched to the city’s presidential palaces compound, where Shiite paramilitary troops are stationed, and tried to breach it. At least three cars driven by the troops ploughed into the protesters, killing one and wounding four others, according to a health official who spoke on condition of anonymity because he was not authorized to speak to media.

Elsewhere in the city, protesters tried to attack the headquarters of Assaib Ahl Al-Haq Shiite militia and the guards stationed there opened fire. It was not immediately clear if there were casualties.

Other protesters set tires on fire on main streets and highways, ignoring the curfew imposed by the authorities.

Meanwhile in Baghdad, security forces launched a search operation to determine the source of three mortar shells that landed inside Baghdad’s heavily fortified Green Zone. There was no immediate claim of responsibility for the mortar shells that landed just after midnight Friday in an abandoned lot in the Green Zone, and no casualties were reported.

The rare attack comes amid a political crisis and against the backdrop of the Basra protests, adding to overall tensions in the country.

The newly-elected parliament earlier this week held its first session since the national elections in May. The session was adjourned amid disagreements as two blocs, both claiming to hold the most seats, vied for the right to form a new government.

The new parliament faces the twin tasks of rebuilding the north of the country following the war against the Islamic State group and rehabilitating services in the south, where severe water and electricity shortages have fueled protests.

A coalition led by al-Abadi and populist cleric Moqtada al-Sadr has the support of the U.S. and Saudi Arabia, while an alliance between former Prime Minister Nouri al-Maliki and militia leader Hadi al-Amiri has the backing of Iran.

Both alliances are dominated by Shiites, who have held the preponderance of power in Iraq since Saddam Hussein’s ouster in 2003. But the largest Sunni blocs are aligned with al-Abadi and al-Sadr. Iraq’s two main Kurdish parties have not taken a side.

A representative of the Shiite community’s spiritual leader, the Grand Ayatollah Ali al-Sistani, condemned during the Friday prayers sermon the violence against peaceful protesters and called for the quick formation of a new government that can deal with the challenges facing the country.