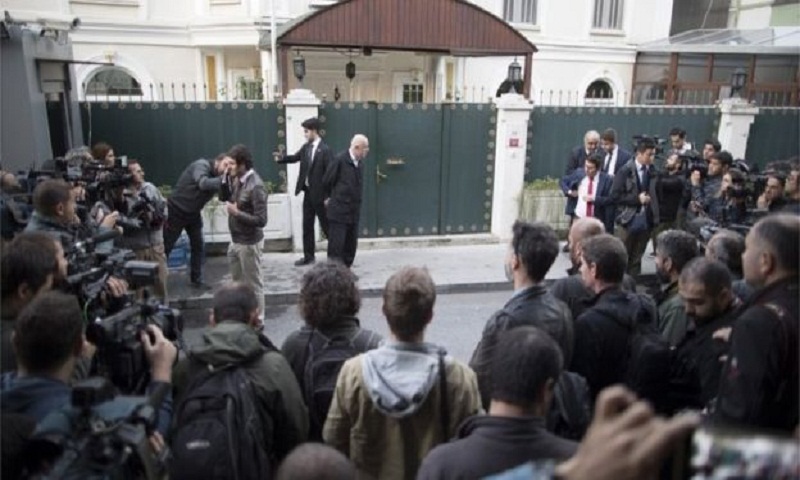 US President Donald Trump has cautioned against rushing to blame Saudi Arabia over the disappearance of Saudi journalist Jamal Khashoggi.
He told the AP news agency that Riyadh was being treated as “guilty until proven innocent”.

Unnamed Turkish officials say a search of the Istanbul Saudi consulate gave more evidence that he was killed there.

The journalist, a critic of the Saudi leadership, was last seen alive entering the consulate on 2 October. Saudi Arabia has denied killing him and initially said he left the building unharmed.

However, the New York Times reports that four of the 15 people named by the Turkish authorities as suspects in Mr Khashoggi’s disappearance have links to the crown prince, while another is a senior figure in the country’s Interior Ministry.

According to the newspaper, one of the men has been photographed accompanying the royal on recent foreign visits.

The case has put Saudi Arabia under pressure from close allies.

On Tuesday, G7 foreign ministers called for Saudi Arabia to conduct a “transparent” probe into the issue.

US Secretary of State Mike Pompeo is due to visit Turkey on Wednesday, following a meeting with Saudi King Salman and the crown prince on Tuesday.

What has Prince Mohammed said?

The Saudi heir apparent wields considerable power in the kingdom and is being held responsible by many outside for whatever happened to Mr Khashoggi.

Mr Trump tweeted that Prince Mohammed had spoken to him on the phone and he “totally denied any knowledge of what took place in their Turkish Consulate”.

The president said he “told me that he has already started, and will rapidly expand, a full and complete investigation into this matter. Answers will be forthcoming shortly”.

The phone call coincided with a visit to Saudi Arabia by US Secretary of State Mike Pompeo, sent there by Mr Trump to deal with the crisis in relations.

On Monday, Mr Trump speculated that “rogue killers” may have been behind the journalist’s disappearance.

In a further sign of disquiet within the US, a leading Republican senator and defender of US-Saudi links, Lindsey Graham, has been highly critical of the Saudi crown prince.

“This guy’s gotta go,” he said on Tuesday morning on Fox News, describing Prince Mohammed as a “wrecking ball”.

What is the state of investigation?

A search was due to be conducted on Tuesday of the consul’s residence, some 200 metres away from the consulate.

But that has now been delayed because no Saudi official can be present for what has been billed as a joint investigation, Turkish officials say.

The consul, Mohammad al-Otaibi, left Turkey on a commercial flight bound for Saudi Arabia earlier in the day.

On the day of Mr Khashoggi’s disappearance, several vehicles with Saudi diplomatic number plates were seen on video footage moving from the consulate to the residence.

A Turkish official is quoted by Reuters as saying “strong evidence” was found but no conclusive proof.

Turkish security sources have long made clear they have audio evidence pointing to his murder.

The search of the consulate continued into the early hours of Tuesday. Samples, including soil from the garden and a metal gate, were reportedly taken.

Turkish President Recep Tayyip Erdogan told reporters the investigation “was looking into many things such as toxic materials and those materials being removed by painting them over”.

The New York Times and CNN, quoting unnamed sources, reported on Monday that Saudi Arabia would acknowledge that Mr Khashoggi’s death was the result of an interrogation that went wrong.

What is alleged to have happened at the consulate?

Mr Khashoggi, who has written for the Washington Post and is a US resident, arrived at the consulate at 13:14 local time on 2 October to obtain paperwork so he could marry his Turkish fiancée, Hatice Cengiz.

Reports suggest an assault and struggle took place in the building.

Turkish sources allege he was killed by a 15-strong team of Saudi agents pictured entering and leaving Turkey on CCTV footage released to media outlets.

There are allegations in Turkish media that his body was dismembered in the building.

Mr Khashoggi was once an adviser to the Saudi royal family but fell out of favour with the country’s rulers and went into self-imposed exile.

2018-10-17
Mr. Admin
Previous: Royal tour: Prince Harry gets his beard rubbed
Next: At least 30 killed by Hurricane Michael, according to estimates