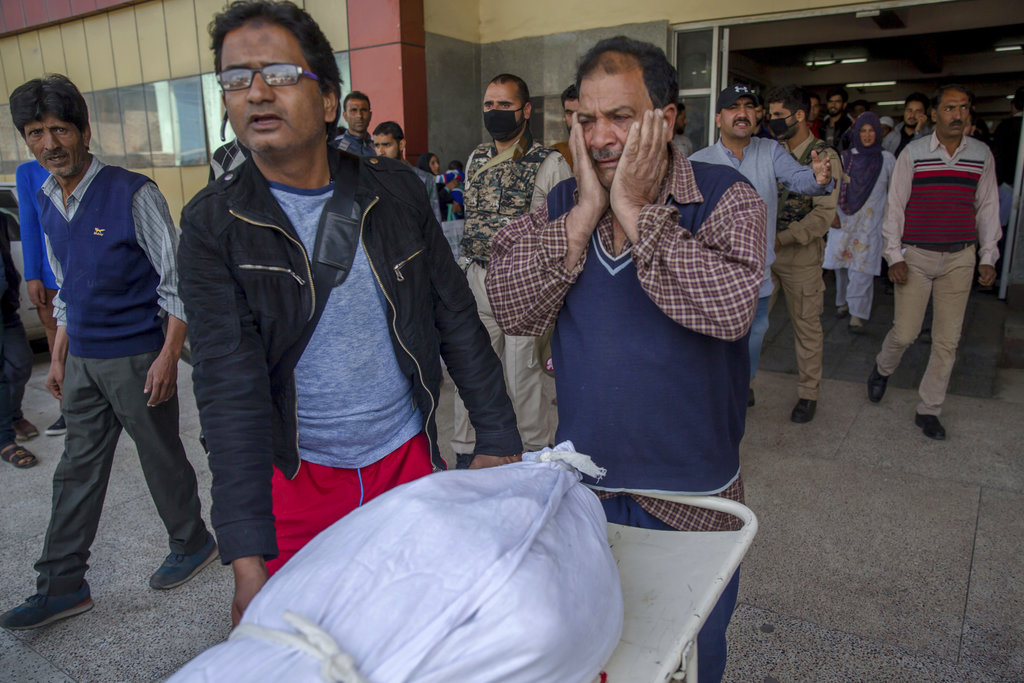 Photo: A Kashmiri man cries as the body of a relative is carried on a stretcher outside a local hospital in Srinagar, Indian controlled Kashmir, Friday, Oct. 5, 2018.

Srinagar, Oct 5 : Suspected rebels on Friday shot and killed two activists affiliated with a pro-India Kashmiri political group in the disputed region’s main city, officials said, as authorities prepared for elections with the deployment of tens of thousands of additional soldiers in the already highly militarized region.

Police said the shootings outside a meat shop in Srinagar also wounded another activist.

The casualties come ahead of phased elections for local councils that start Monday.

The three activists of the pro-India National Conference were targeted even though their party is not contesting the elections, accusing New Delhi of fiddling with Kashmir’s special status in the Indian Constitution. Other regional parties such as the People’s Democratic Party also are boycotting the polls.

No rebel group fighting against Indian rule immediately claimed responsibility for the attack.

India says the polls are a vital grass roots exercise to boost development and address civic issues. Political separatist leaders and armed rebel groups who challenge India’s sovereignty over Kashmir have called for a boycott, saying the polls are an illegitimate exercise under military occupation.

Authorities have deployed more than 40,000 additional soldiers in what is already one of world’s most heavily militarized regions to guard the voting for urban and village councils.

Kashmir is divided between India and Pakistan, and both countries claim it in its entirety. Rebel groups demand that Kashmir be united either under Pakistani rule or as an independent country.

Anti-India sentiment runs deep in Kashmir’s mostly Muslim population and most people support the rebels’ cause against Indian rule.

Nearly 70,000 people have been killed in the uprising and the ensuing Indian military crackdown.