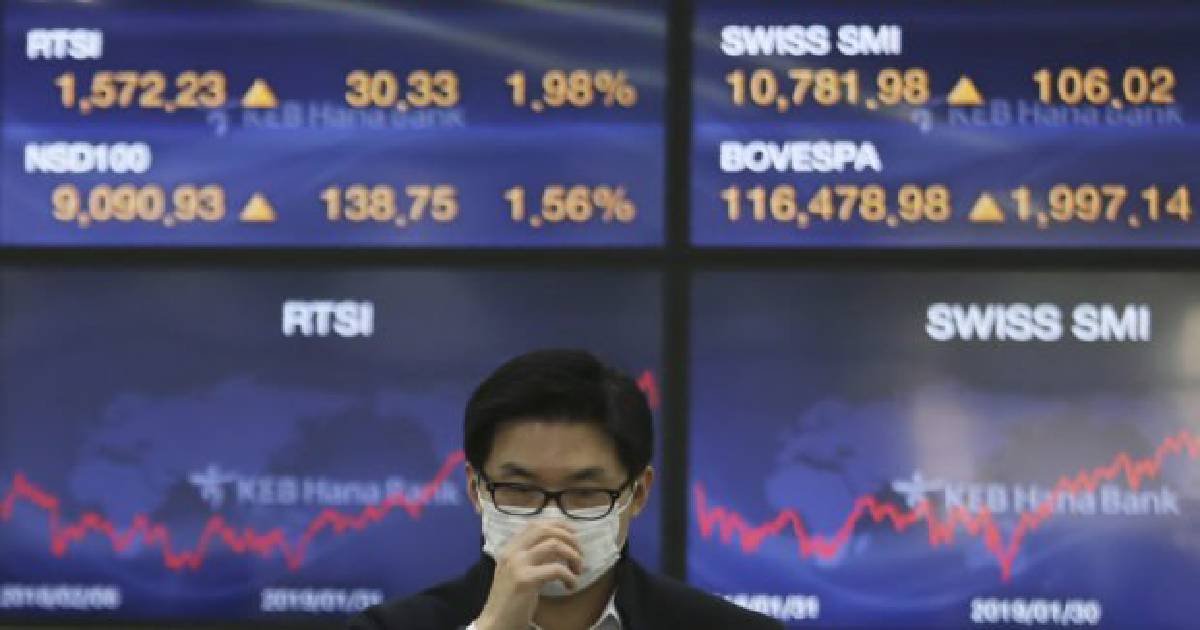 A currency trader adjusts his mask at the foreign exchange dealing room of the KEB Hana Bank headquarters in Seoul, South Korea

Shares advanced in most Asian markets on Wednesday after a rebound on Wall Street that reversed most losses from a sell-off the day before.

The U.S. rally overnight snapped a two-day skid driven by fears that the spread of a new virus in China could snag global economic growth. China reported Wednesday that the virus has sickened more than 6,000 people in China and over a dozen other countries and killed 132 people.

Investors placed their concerns about the virus’ potential economic impact on the back burner and snapped up stocks beaten down earlier in the week, particularly chipmakers and other technology companies. The sector notched the biggest gain Tuesday and powered much of the rally.

“There are always a few bargain hunters out there who will step in and start buying almost immediately,” said Randy Frederick, vice president of trading & derivatives at Charles Schwab. “But I’m quite surprised that it’s been this quickly and that it has rebounded as much as it has.”

Despite the rebound, the major U.S. indexes are still down for the week. The losses have hit smaller company stocks hardest, erasing the Russell 2000’s gains for the year.

U.S. stocks were running at all-time highs at the start of the month. An index measuring volatility in the market was running at 12-month lows and the benchmark S&P 500 had climbed around 13% since early October after Washington and Beijing announced they would sign a preliminary trade deal.

That set the market up for a pullback, and investors’ jitters over the virus outbreak centered on the central Chinese city of Wuhan fit the bill.

“It may be symptomatic about how bullish overall people have been and how much money still sits on the sidelines,” Frederick said. “People are just looking for any opportunity to get a bargain right now, but it could ultimately end up being a little bit risky to do that.”

Hong Kong joined much of China in seriously restricting travel by cutting all rail links to the mainland as of Friday. China’s containment efforts began with the suspension of plane, train and bus links to Wuhan and has now expanded to 17 cities with more than 50 million people in the most far-reaching disease-control measures ever imposed.

The United States and several other nations were taking steps to airlift citizens out of a Chinese city at the center of the outbreak. Still, U.S. health officials said Tuesday that, for now, the risks to Americans is very low.

Apple was one of the big gainers in the technology sector Tuesday. The iPhone maker rose 2.8% and continued to climb in extended trading after it released quarterly results following the closing bell  that topped analysts’ estimates.

Chipmakers also made solid gains. Intel added 2.5% and Nvidia rose 3.2%. Many of those companies are affected by China’s economy because they rely heavily on that nation for sales and supply chains.

It’s a heavy week for corporate earnings. Boeing, McDonald’s, Facebook and Microsoft will all report results on Wednesday. Other big names reporting this week include Coca-Cola, Amazon, Caterpillar and Exxon Mobil.

The Federal Reserve is also set to deliver its latest interest rate and economic policy update Wednesday. The central bank lowered its key interest rate three times last year in a bid to shield the economy from slowing global growth and the fallout from the U.S.-China trade war.

Benchmark crude oil rose 73 cents to $54.21 per barrel in electronic trading on the New York Mercantile Exchange. It gained 34 cents to settle at $53.48 a barrel on Tuesday. Brent crude oil, the international standard, gained 78 cents to $59.59 per barrel. Overnight it picked up 23 cents to close at $58.81 a barrel.