‘Election in October’ if MPs block no deal Brexit 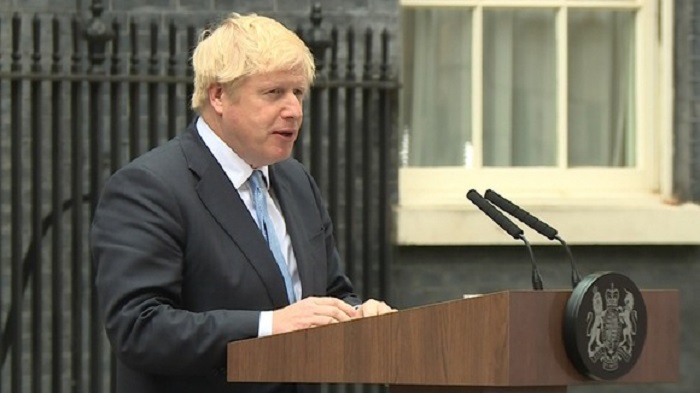 The UK government is expected to table a motion to hold a general election on 14 October if it is defeated by MPs opposed to a no-deal Brexit on Tuesday.
Britain Prime Minister Boris Johnson said he did not want an election, but progress with the EU would be “impossible” if they won.

Tory rebels are joining forces with Labour to bring a bill designed to stop the UK leaving the EU on 31 October without an agreement.It would force the PM to request a delay to 31 January 2020 in that event.

Speaking outside No 10, Johnson insisted that with MPs’ backing, he would be able to achieve changes to the UK’s current Brexit deal – negotiated by Theresa May and rejected three times in the Commons – at an EU summit on 17 October.

But he said if MPs voted to block no deal they would “plainly chop the legs out from under the UK position”.

The PM said there were “no circumstances” in which he personally would ask Brussels to delay Brexit and UK negotiators must be allowed to get on with their work without interference from Westminster.

“Let us get on with the people’s agenda, fighting crime, improving the NHS, boosting schools, cutting the cost of living, and unlocking talent and opportunity across the entire United Kingdom.”‘National interest’

Faced with Johnson’s promise to leave the EU on 31 October, with or without a deal, a number of MPs have come together across party lines to try to prevent the latter outcome.

They are expected to put forward legislation on Tuesday under Standing Order 24 – a Commons rule which allows urgent debates to be called.

The bill, which has now been published by Labour MP Hilary Benn, would force the PM to request a Brexit delay to 31 January 2020 unless MPs had approved a new deal, or voted in favour of a no deal departure, by 19 October.

Tory rebels – who include former ministers and prominent backbenchers – have been warned that those who support the legislation face being expelled from the party and deselected.

But leading figures, including ex-Justice Secretary David Gauke, have insisted that despite the threat, they will press ahead and – in their words – put the “national interest” ahead of their own.

Speaking at an event on Monday evening, Labour leader Jeremy Corbyn told supporters his party was ready for a vote, adding: “I will be delighted when the election comes.”

He accused Johnson of “threatening people with a no-deal Brexit if he doesn’t get his way in Parliament”.

Did Boris Johnson just announce an election without actually announcing an election?

He’s always said that he really doesn’t want to go to the country again.

Downing Street is still absolutely adamant that is still the case, and again with the formality of the No 10 podium, he insisted it was not what he wanted to do.

But he also made plain that there were no circumstances in which he would ask Brussels to delay our departure from the EU.

And that means only one thing. Calling an election if, in his view, he needs to. When would he need to do that? Soon.

There is not due to be another general election until 2022.

Under the Fixed Terms Parliament Act, Johnson would require the backing of two-thirds of the UK’s 650 MPs to trigger an early poll this autumn.

Should this happen, the prime minister would be able to recommend the date – likely to be a hugely contentious issue given the looming Brexit deadline – to the Queen.

What does the no-deal bill say?

The legislation to be put forward on Tuesday seeks to tie Boris Johnson’s hands, and instructs him to ask the EU for an extension of the Brexit process until 31 January 2020.

A lot of attention will be on the clause which says that if the European Council proposes an extension to a different date, then the prime minister must accept it within two days, unless that extension has been rejected by the House of Commons.

In other words, the power to decide will lie with members of Parliament not with the government.

For a PM who has promised to leave on 31 October come what may, it would seem to be impossible to accept.

Hence all the talk of an early election. We will know for sure before the end of this week.