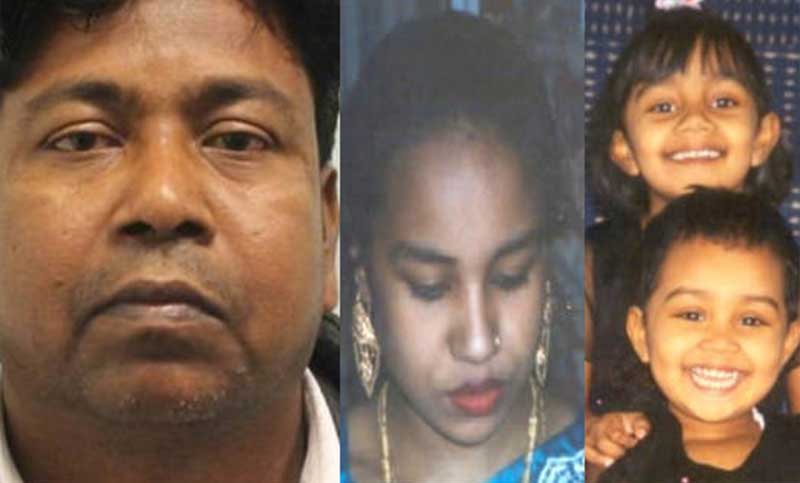 A UK court has sentenced a Bangladeshi man to life term imprisonment for killing his wife and two daughters in London in 2007.
The convicted lifer is identified as Mohammed Abdul Shakur.

London’s Old Bailey court delivered the judgment in the presence of the accused on Thursday.On January 1, 2007, police broke into Shakur’s family home in East London’s East Ham, as no one in the neighbourhood saw or heard from his wife Juli Begum, 26, Thanha Kanum, 6, and Anika Khanum, 5, for around 10 days.

Thanha and Anika were also reported to have not resumed school after the Christmas break. On the same day, police found their bodies concealed under a duvet in a rear bedroom.

The autopsy report showed that Juli was initially inconclusive but later ruled to be consistent with asphyxiation. Thanha’s cause of death was recorded head trauma, while Anika was killed by strangulation with a ligature.

The court was told that 45-year-old Shakur and Juli had an arranged marriage in Bangladesh in October, 1999.

She had sponsored his immigration visa but incidents of domestic conflict started just a few months into the marriage.

Metropolitan Police detectives launched a murder investigation and Shakur was quickly identified as a suspect. Detectives established that Shakur visited the Bangladeshi High Commission in London to obtain a passport on the same day of killing. The following day, he went to a travel agent and ordered a one-way ticket to Bangladesh.Enquiries to trace and arrest Shakur were undertaken in Bangladesh and India, following the information of his hiding in the Assam. Contact was made with a UK Foreign and Commonwealth Office (FCO) representative in New Delhi, who informed local police of the Met’s interest in Shakur.

In May 2013, the FCO representative called UK detectives to inform that Shakur was arrested for illegal stay in India. It was suggested that he had been crossing back and forth between Bangladesh and India on a regular basis for work.

On April 6 this year, formal extradition proceedings with India ended with Shakur’s arrest.