Prices of goods imported from China mark a rise in Bangladesh 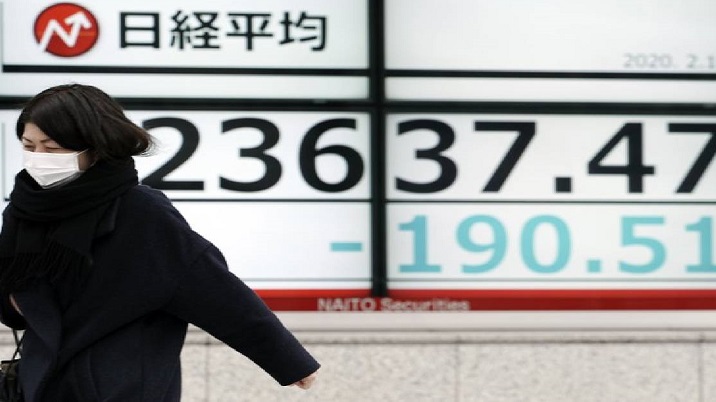 Photo : A woman walks past an electronic stock board showing Japan’s Nikkei 225 index at a securities firm in Tokyo Monday, Feb. 10, 2020. Asian stock markets slid Monday after China reported an uptick in new cases of its virus outbreak and analysts warned optimism the disease is under control might be premature.

The longer than expected shutdowns of Chinese factories because of the coronavirus outbreak are having a big impact on the world’s second largest economy and the global supply chain.
A large number of carmakers are now facing the threat of shortage of parts. Many fear that assembly lines in Asia, Europe and the USA could be hit hard in a devastating blow that will likely amplify the economic cost of the outbreak.

Employers across China had been ordered to remain closed after the annual holiday as part of an attempt by authorities to stem the spread of the virus which originated in Wuhan of Hubei province, home to many auto parts suppliers.There are also concerns about supplies of Apple products as the disruptions continue, reports the BBC. Restrictions have been removed for a number of companies but several major manufacturers remain closed.

Ana Boata, the head of macroeconomic research at Euler Hermes, estimated that every week that Chinese factories remain shut subtracts $26 billion from global trade, according to New York Times.

Foxconn, a major supplier to Apple, has yet to reopen its largest Chinese factory. Shenzhen’s Longhua district, where the plant is located, has said production would restart as soon as officials have completed inspections at the facility.

Several major car makers are also among the manufacturers that have extended the shutdowns of their operations. Nissan and PSA, which makes the Peugeot and Citroen brands, have said their factories will remain closed until Friday.

VW, BMW, Toyota and Honda have all said they now plan to restart Chinese production next week. At the same time French car parts maker Valeo will keep its three sites in Wuhan shut until at least 13 February.

Global Impact of ShutdownApart from a disruption of the global supply chain, many other sectors, such as computers and electronics, textiles, heavy machinery, shipping, transport, and tourism among others will be affected.

Traders in Bangladesh are already feeling the pinch. UNB correspondents have reported substantial increase in prices of goods imported from China. The fruits market has also been affected.

Since the coronavirus outbreak has forced car and car-parts factories to remain closed, the impact will likely be felt for days and many assembly lines will likely grind to a halt if the situation does not improve.

The auto industry employs an estimated eight million people worldwide. The longer the shutdown extends, the harder the impact will be on the sector.

China is the largest car market in the world and the shutdowns will affect sales both inside mainland China and other countries.

Honda, General Motors, and Dongfeng Motor all have factories in Hubei province, where the outbreak is thought to have started and is now in lock down. One of Honda’s two Chinese joint venture manufacturing plants is in Wuhan, the capital city of Hubei.

Last week South Korea’s Hyundai became the first major car maker to halt production outside China because of a shortage of parts caused by the coronavirus.

Fiat Chrysler also warned that it may have to suspend production in Europe as it struggles to get enough components from China.

On Friday, Suzuki said it may start sourcing parts from outside China over concerns that the outbreak could disrupt production in India, its biggest market.

But Germany will be the hardest hit if the situation does not improve. The Ifo Institute in Munich estimated that a decline in Chinese growth rate of 1 percentage point would strip 0.6 percentage points from Germany’s growth, the New York Times report said. This is in part because factories in Germany depend heavily on parts made in China.