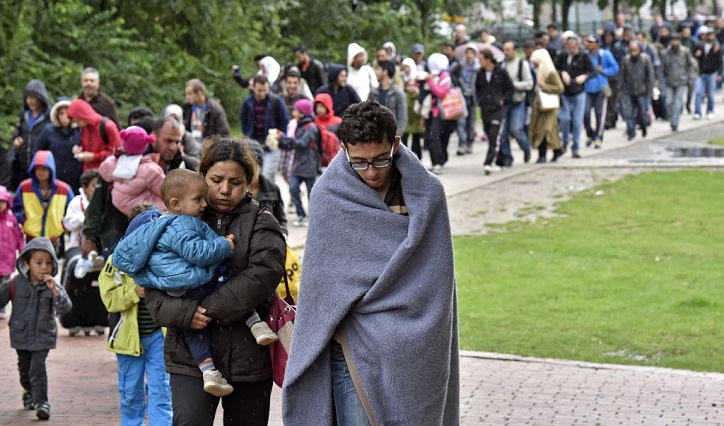 A tense truce within German Chancellor Angela Merkel’s conservative camp shattered Thursday after her hardline interior minister defended protests marred by neo-Nazi violence and blasted migration as “the mother of all political problems”.

The latest shots across Merkel’s bow came just two months after the minister, Horst Seehofer, threatened to torpedo her ruling coalition over the explosive border issue.

An uneasy calm that had taken hold during the holidays imploded in late August when a 35-year-old German man was stabbed to death in the eastern city of Chemnitz.

Three asylum seekers — two Iraqis and a Syrian — are suspects in the murder.

Far-right groups and thousands of local citizens took to the streets in the days after the stabbing, making illegal Nazi salutes and a number of attacks on foreign-looking people.

As Germany’s top law enforcer, Seehofer had faced calls to condemn the ugly scenes of marauding mobs, who also assaulted reporters and police.

He reserved judgement until Thursday’s incendiary interview, in which he offered a spirited defence of the demonstrations, albeit while criticising disturbances of the peace.

“There is agitation and outrage among the public over this killing that I can understand,” Seehofer told the daily Rheinische Post.

“If I weren’t a minister, I would have hit the streets as a citizen — of course not with the radicals though.”

Seehofer insisted he had “zero tolerance for forces that seize on these developments to call for violence or to actually commit it, including against the police”.

“That is totally unacceptable, there is no grey zone,” he said.

However Seehofer, the most strident critic of Merkel’s liberal refugee policy within her coalition, expressed sympathy with the anger that fuelled the protests.

“The migration issue is the mother of all political problems in this country. I’ve been saying that for three years,” since Merkel opened Germany’s borders to more than one million asylum seekers as other EU countries shut the door to them.

The comments echoed remarks this week by Seehofer’s firebrand counterpart from Italy, Matteo Salvini, that Merkel had “underestimated” the troubles mass immigration would bring.

Seehofer’s Christian Social Union (CSU) is looking down the barrel of a tight state election in Bavaria next month.

With an eye to the poll, in which the CSU is fighting to head off a strong challenge by the far-right AfD party and maintain its absolute majority, Seehofer directly contradicted Merkel’s assessment of events in Chemnitz.

He was quoted by German media as saying late Wednesday that her government had been too quick to criticise the protests and that he had waited until he had “authentic information” to comment.

The same day, Saxony premier Michael Kretschmer denied in a speech to the state assembly on Wednesday that extremists had run wild in Chemnitz.

“There was no mob, no hunting of foreigners and no pogroms,” he said, drawing accusations that he was playing down the far-right problem in his region.

Merkel has repeatedly expressed shock about the distressing scenes in the city — which were captured on video and described to the media by several victims.

On Wednesday she stressed that “the images I’ve seen show quite clearly the hate-filled pursuit and persecution of innocent people”.

The migration issue has driven a deep wedge through Germany and weakened Merkel, who has led the country for 13 years. Most observers say her current fourth term will likely be her last.

Although new arrivals are far down from their 2015-2016 peak, she was forced to make major concessions to Seehofer in July to tamp down his rebellion by hammering out bilateral agreements with EU partners to take back asylum seekers who later arrived in Germany.

Although her critics have been emboldened by a string of high-profile crimes allegedly committed by migrants, defenders of Merkel’s more welcoming stance toward refugees have mobilised as well.

Some 65,000 people attended an anti-racism rock concert in Chemnitz Monday, which went off without incident.

And late Wednesday, some 10,000 counter-protesters turned out in Hamburg against a “Merkel must go” rally which drew about 150 participants.