A Bangladesh national was shot to death by Indian ethnic group Khasia people along Sylhet border on Saturday evening.

The border killing was reported within one week of killing another Bangladeshi by Indian nationals in the bordering area.

Local residents said that Jain Uddin along with his three friends went to collect fire woods from a jungle near a camp of Border Guard Bangladesh at Uthma area under Companiganj at around 4:30pm on Saturday.

A group of the Khasia people of Meghalaya State of India opened fire targeting the Bangladeshis when they were returning home after collecting fire woods, leaving Jain Uddin dead on the spot, they said.

Uthma camp commander of the BGB, Mohammed Rafik, confirmed New Age of the incident of opening fire by the Indian nationals.

He said that Jain Uddin died on the spot immediately after receiving bullets on his shoulders and back of his head.

‘The body of the victim was recovered in that night from the spot after being informed by his relatives,’ the BGB camp commander said.

‘Legal step would be taken in this regard after receiving a written complaint from the victim’s family,’ he said in the afternoon.

On December 24, the Khasia tribesmen had shot a Bangladeshi man to death at Goabari Adarshyan Gram under Nizpat union of Jaintapur upazila along the Sylhet border, police said. 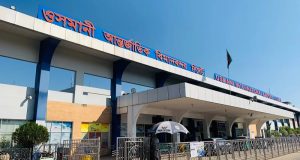